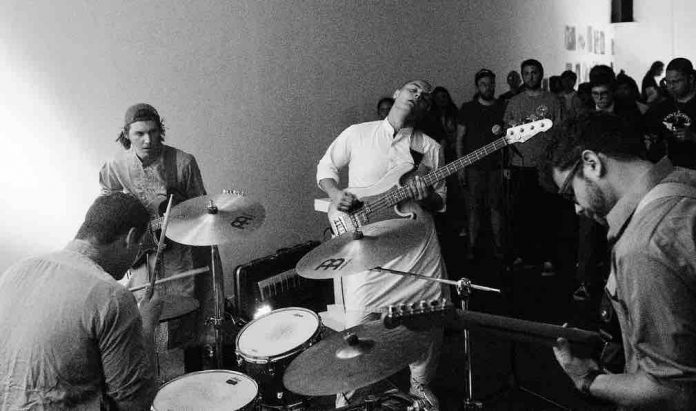 Typecast, the latest from Houston, Texas post-punk rockers Ruiners is a strong, strong candidate for rock album of the summer. Chaotic drumming sets the stage throughout this nine-track masterpiece of medlocially aggressive awesomeness. When a band works a strong sense of dynamics into their work, it allows the music to grow while also allowing the listener to play a fun game of the unexpected. Crazy guitars, dual vocals and a fresh take on a wildly underrated genre of rock all come into play throughout this killer album.

Lead single, “Outside” serves as a great introduction not only to the album, but the band as well. The high-hat work on the drums is so damn furious and frenzied that this aspect alone can drive the whole song. But what that really does is add to the overall intensity. The song has a trace in early 00’s punk based purely on the fact that despite the insanity of the song, the vocals are drenched in an addictive, catchy melody that in the event you can catch your breath in a mosh, you’d also sing along.

Moments like this are abundant throughout Typecast. While a lot can be found in a name, one thing is for sure- Ruiners will not be typecast into any one musical corner. The band’s full potential is on full display on strong cuts such as the aforementioned “Outside” and “Liquid”. With a sonic assault similar to post-punk legends Fugazi, Ruiners more than hold their own in carrying on that legendary torch.

The band’s intensity is only outmatched by their potential. Come September 4th, the era of Ruiners will be upon us. And we’ll all be really thankful for this great album! Make sure to check Ruiners out across their social media sites and get ready for Typecast, September 4th!