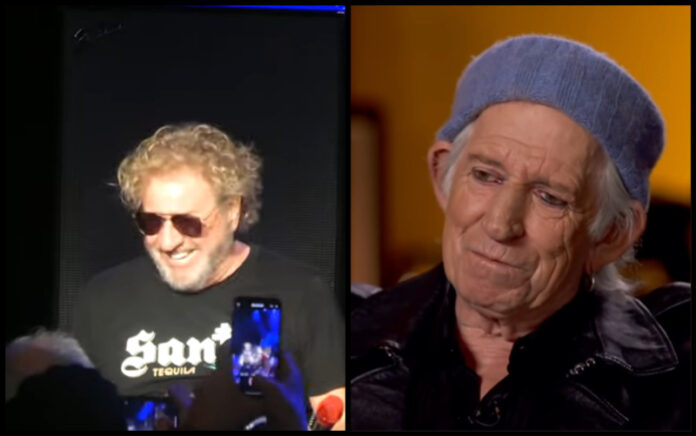 Sammy Hagar is best known as one of Van Halen’s premier leading frontman as he was the man to take over the microphone from David Lee Roth back in 1985. While Hagar, who would during his time with the group sing such hits as: “Right Now” would have a successful solo career as well and career with various side projects. Recently a guitar rock icon discussed a hypothetical Van Halen ‘reunion’ with Sammy Hagar

During a conversation with TMZ Live, ‘The Red Rocker’ himself would make the revelation that he makes more money on other ventures that are non-music related in comparison to what he has made in recording and touring.

“It’s true. Yes. It’s true. It’s what’s made it so great for me. I’m telling you, guys — I swear by this — if you get lucky enough to get successful outside of music, it makes it so much better in your elder years. Like now, I’m in my 70s and I’m still going and playing music. And you know why? Because I don’t have to do it for a living; I don’t have to make it my business. So I can pay my band more than they can make [playing with anyone else]. They’re happy, and so they’re happy to play with me. We all walk out on stage and we’re happy to do it ’cause we don’t have to do it.

Hagar would later claim that unless you are Rolling Stones icon Keith Richards or someone on the same wavelength, most musicians are just allegedly touring for money. He continued:

“When you’ve been doing it as long as me, unless you’re Keith Richards, who I don’t think can do anything but play music — I love this guy; he’s my favorite rock star on the planet — a lot of people are doing it for money, and they go out and they punch a clock,” he continued. “So we do it for fun. It’s almost like we’re in a garage band again because I make my living another way and music is something I just love to do. But if someone said, ‘Hey, you’re gonna play 150 shows this year,’ I’d tell ’em, ‘I quit.’ Because I know I would get pissed off and I’d be saying, ‘Oh, I’ve gotta do a show tonight, man. There’s a great boxing match on.’ Or, ‘I wanna take my wife out and go and have a nice dinner.'”