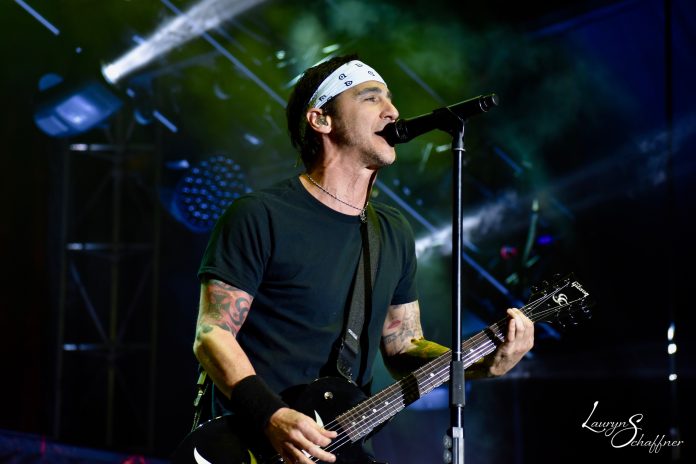 Sunday evening, I attended one of Shinedown and Godsmack’s shows with my dad. Though this wasn’t an assignment for me, I felt obligated to write about the experience afterward because I think everyone should go see this show if they have the chance. It’s definitely one of the best events going on currently – my mind was completely blown.

Having attended Welcome to Rockville and Rock on the Range this year, this show was my third time seeing Godsmack. Their performance at Rock on the Range to end out the final day (before Tool’s closing performance) was exceptional. Frontman Sully Erna had all of MAPFRE Stadium going absolutely bisserck. “I want you to LOSE your God damned minds,” he grunted at everyone. And it happened. Pits opened up all over the ground level, a conga-line formed during “Voodoo” and it sounded like rolling thunder when the crowd sang the words back to him during “Whatever.”

So, needless to say, my expectations for this show were high. And all three bands delivered.

This was also my third time seeing Red Sun Rising. They opened with an energetic half hour performance, performing old hits like “The Otherside” and “Emotionless” as well as newer ones like “Deathwish” and “Veins.” Though in the beginning it seemed like the crowd needed a little warming up, singer Mike Protich eventually had everyone jumping around and dancing with him. The set started the night off on a heavy note and definitely got me into the concert mood, despite knowing how exhausted I was going to be at work the next morning. Watch Alternative Nation’s interview with Red Sun Rising here. Next came Shinedown. I had prepared my dad for how good of a performance Godsmack was going to give, but even I didn’t see this coming as it was my first time seeing Shinedown. A curtain covered the stage as the lights went out and an electric chaos started to intensify from behind it. Logos and lyrics flashed across the curtain to build up suspense until it was finally dropped, while an explosion and pyrotechnics lit up the entire pavilion. It was the Sound of Madness, literally – that’s the song they opened with.

I have never experienced such an energetic intro to a set before.

Their set included the perfect balance of hardcore, INSANELY loud rock and roll with some softer songs as well. The slower songs gave frontman Brent Smith the spotlight as the emphasis was on his voice more than anything. Let me tell you – the guy can fucking sing. He has a distinct, exceptional voice and he didn’t miss a note the entire night. The group overall captures their studio sound very well live, which I think says a lot.

Highlights of Shinedown’s set were “Cut the Chord,” “Second Chance,” and “Simple Man,” which actually summoned some tears in the eyes around me. I won’t say who, don’t want to embarrass anyone. It was intense and emotional, I’ll admit, but my only complaint is that Smith had the crowd sing the best part of the chorus each time. This cover is one of the band’s most famous performances, especially the vocal delivery. So I want to hear it sang by the singer, not the thousands of people around me. Who have terrible pitch.

And finally, we had the ferocious Godsmack. They will never fail to blow the roof off of the venue (though I do wish they were a tad louder), and Sully never fails to engage the audience, whether it’s having the crowd sing back and compete over which side is louder or mentioning sports rivalries. The crowd’s energy was at the highest point during this final set, and the band was certainly feeding off of it.

The most remarkable parts of Godsmack’s performance were “1000HP,” which had everyone going psycho, “Voodoo,” always a nice psychedelic-esque break from the heavier tunes, and Sully’s drum solo, which had me yelling “GET YOU A MAN WHO CAN DO BOTH!” I mean, watching the singer/guitarist ride out on a drumset and turn everyone’s brains into mush is pretty damn cool.

Get out there and go see this show. This trio will also be attending the few Monster Energy Festivals we have left this year in the fall, like Louder than Life and Aftershock.