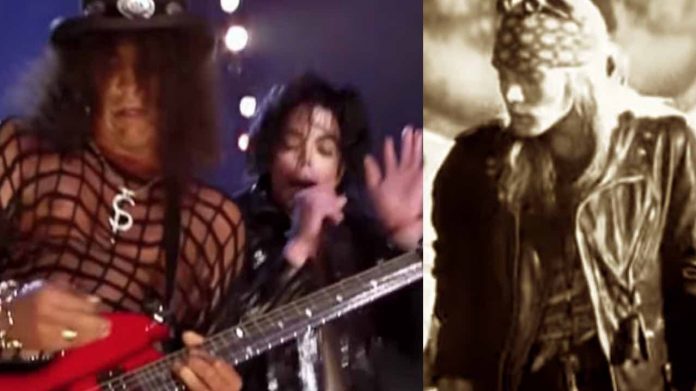 Guns N’ Roses guitarist Slash was asked in a new Forbes interview who the greatest singer of all time is, and his answer was a tie between Mick Jagger and James Brown, followed by Michael Jackson, and then Axl Rose.

“I’d have to give it to Mick Jagger and James Brown, and I know they’re very much related, but both those guys were so committed. And then Michael [Jackson]. Axl [Rose] is one of the best frontmen of all time too. They’re so committed to the show and so aware of how important that dynamic is.”

Former Guns N’ Roses manager Doug Goldstein claimed in a spring 2018 Guns N’ Roses Central interview that Slash collaborating with Michael Jackson contributed to his falling out with Axl Rose in the 90’s. Goldstein mentioned that Slash’s collaboration with Jackson came shortly after Rose gave an emotional interview to Interview Magazine where he opened up for the first time about his father sexually abusing him as a child.

Keep in mind that based on the tone of the conversation, Goldstein’s memories of his conversation with Slash appears to not be an exact paraphrase, as it also seems to express the thoughts Goldstein had in his head at the time. Alternative Nation transcribed Goldstein’s comments.

“So he does that huge interview, and he bears his deepest darkest secret, and Slash comes to my room two months later and says: ‘Hey, I’m going to play with Michael Jackson.’ What! No! So everybody in the industry knows that Eddie Van Halen got 1 million dollars for ‘Beat It,’ for the single. I said, ‘At least let me negotiate the deal.’ ‘No, it’s already negotiated.’ ‘What do you mean? You’re not going to let me do my job?’ I said, ‘Look, I need to go to Axl with some ammunition to explain why you’re going and hanging out with a pedophile.’ He had just shared what happened. Slash said, ‘It’s already negotiated.’

So I said, ‘At least give me some ammunition to go to Axl and tell him but yeah, he’s getting X amount of dollars.’ He said, ‘He’s giving me a big screen TV.’ ‘Hang on, what?’ ‘Yeah, he’s going to give me one of those big 72 inch big screen TV’s.’ ‘So that’s what I get to go with Axl with? You’re going to go play with a pedophile after he just bore his soul, for a big screen TV?’ ‘Yeah.’

That was the end of the end right there, that was the beginning of the end, but that sealed the fate of the band. Axl never again thought Slash was his brother. Like I said earlier, the greatest thing I ever did was let Axl know what they thought of him, because he loved those guys. He thought they understood how damaged his own life was.”