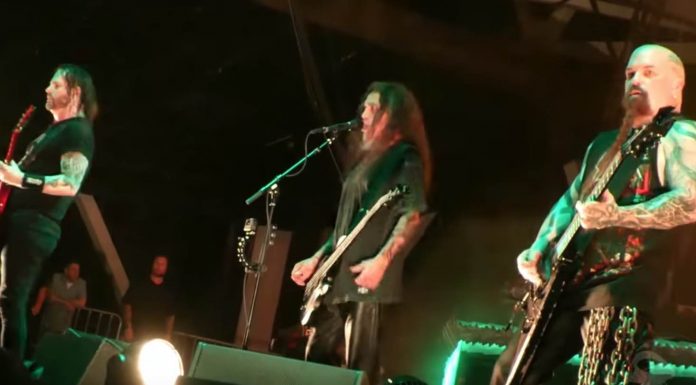 Trapped in Purgatory. A lifeless object, alive. Awaiting reprisal. Death will be their acquiescence.

Truer words may have never been spoken- especially when it comes to heavy metal. Slayer, the unabashed masters of thrash metal mastery are winding down the marathon of what has undoubtedly been one of the greatest careers not only in metal music; but music in general. Tom Araya, Kerry King, Paul Bostaph and Gary Holt. Collectively known as Slayer, these four metal maniacs are guaranteeing they cross the finish line at the absolute top of their game.

The band’s 1991 live album, Decade of Aggression served as a great example of the band’s unmatched live performance. Now, thirty-seven years into their career, twelve studio albums later and with legions of hardcore fans who live and die by their music, you could comfortably- and confidently say, that it has been a career of aggression. Slayer never bowed to commercialism. They never cared for trends or made a cash-grab with some half-hearted attempt of conforming like so many other metal bands. They have operated with a pure artistic vision and that vision was to be the most extreme, unapologetic in your face metal band ever to walk this Earth. And as the end draws near, you have to acknowledge that in their absence, a a huge void will be left in the metal world.

To listen to a Slayer album is an experience. But to see Slayer live, that is a whole other juggernaut all together. Live, Slayer attack their craft with twice the charisma, twice the precision and twice the passion of band’s half their age. In a word- they are punishing. Guitars chug, sweep and shred in lightning fast syncopation. Frenetic drumming perfectly locked up with bursts and explosions of fiery red pyrotechnics attack your senses from all angles. And the vocals. How about those vocals. Lyrics explode out of Tom Araya’s throat at a rapid fire pace, screaming tales of horror and insanity all while sold crowd hangs on every word, screaming along in beautifully haunting harmony. And all while he holds down the low end with his perfect bass playing. Words do not do their live performance justice. But I’ll give it a try.

Slayer took Scranton, Pa by storm Tuesday night. Fire burned, there were explosions and pyro for days. “Hell Awaits”, or so the song goes. But their stage show made Hell seem like the place to be.  Here on their final tour, the thrash metal legends crushed  the insanely rowdy crowd with a barrage of classic Slayer songs and a few unexpected gems as well. There was something for everyone but truthfully, everyone was there for one thing: to get their ass kicked by Slayer. And man did they ever. Right from the start, the band burst into “Repentless”, the title track from their 2015 album of the same name. “Repentless” may have opened the set but from that point forward, the band was relentless. And the crowd didn’t stand a chance (in hell).

If you take a minute to look up guitar hero in the dictionary- you will see a picture of Kerry King. The guy just goes for it. The man bleeds metal. With his wild goatee, the tattoos and an array of wicked awesome guitars, he literally headbangs from the opening note until the final cymbal crashes fade away. He never lets up. His enthusiasm and insanely unique lead guitar playing is truly inspiring. And that’s a fact. If i tried to sit and name all the bands King and Slayer have influenced throughout the years, we’d be here for a week.

Throughout the evening, with each song that kept coming, the energy in the Pavilion at Montage kept climbing. During “Mandatory Suicide” and “Chemical Warfare” mosh pits exploded and crowd surfers took center stage. With“Seasons in the Abyss” and “Dead Skin Mask”, fans screamed the lyrics back at the band at a volume that almost drowned out the band. Not to repeat myself, but the band, their setlist and the crowd were relentless. I’ve seen Slayer twice before. Once in 2011 at Yankee Stadium for the Big Four show. And once in 2004 where a guy unintentionally elbowed me in the face in the middle of the pit when i tried handing him his fallen hat. I have a knack for getting my ass kicked at Slayer concerts and here in Scranton was no exception.

The band ripped through one song after another, barely giving the audience a chance to catch their breath. But in one of the few moments of reprieve,a drunk, bald fan in a cut off Dead Kennedy’s tee shirt looked at me- or kind of through me with his glazed over eyes and said, “What song’s next?” I said, “Maybe South of Heaven?” The band began to play “Dead Skin Mask”. And in that moment, this drunken lunatic of a fan punched me in the chest and screamed,”FUCKING SLAYER”, before running off into the distance, likely to lose his mind completely in a mosh pit. And it was awesome! Because that’s what it is all about.

Slayer is less a band and more a way of life. Many have tried and all have failed to replicate them. Their fans are as intense as their music. Their influence and legacy has long been set. And now- in the wake of the band winding down, there was no mailing it in. No coasting. No taking any of it for granted. They rocked like their lives depended on it. The band are going out the way they have always operated. Uncompromising, brutal as hell and as the absolute benchmark of which all other metal bands gauge themselves. If you haven’t seen Slayer live before, you better get your ass out there and see them on this tour. This is not a band you want to regret not getting to experience live.

Slayer. God Damn. Thank you for all the awesome music! The best in the business!

(Props to Naplam Death, Testsment, Anthrax and Lamb of God who all Kicked Ass)