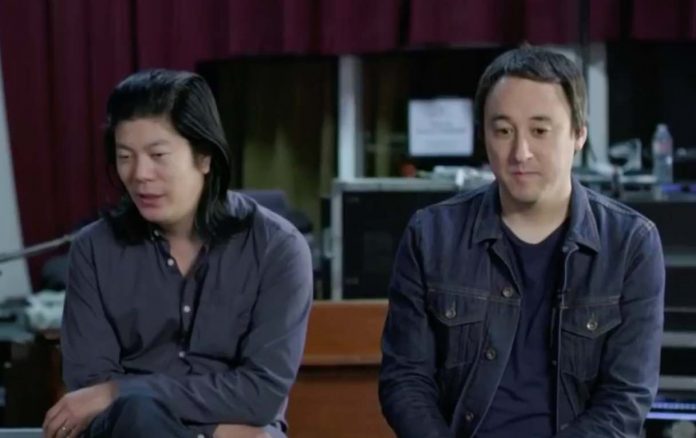 James Iha is back in The Smashing Pumpkins, but his replacement Jeff Schroeder remains. Schroeder was asked in a new Guitar World interview about the unique situation, and said he does not consider Iha his ‘enemy.’ The Smashing Pumpkins are set to perform in Los Angeles on Wednesday. The show is rumored to take place at The Roxy, or a similar Hollywood area club.

“The whole thing is rather funny to me,” he says. “People seem to think that James and I should be enemies—you know, like, ‘He’s taking your job.’ But we’re totally cool, and there’s been no weirdness at all. In the short time that we’ve been together, it’s been extremely pleasant. And musically, it sounds great—we’re not fighting for space or anything like that. This is going to be amazing.”

Guitar World asked Schroeder, “I have to ask, Jeff, were you ever concerned for a brief moment that the return of James might endanger your position in the band?”

Schroeder responded, “No, not at all. Billy was extremely transparent about things from the beginning, and he always said I would be part of it. There was never a time in which I wasn’t. I knew that the whole time.”

Billy Corgan said, “Look, Jeff has put 12 years into the band, and that’s a very serious commitment. He’s dedicated his life to the band, and I feel he’s earned this. Not only is he a great musician, but he’s also very responsible for a lot that goes on behind the scenes. I really didn’t see any way this could work without him.”

James Iha added, “Jeff’s a nice guy, and he’s a great musician. I don’t have any kind of drama with him at all. After practice, I was like, ‘Do you want to play that, or do you want me to play that? I don’t really care which of us plays what.’ It’s very ego-less between us. He’s a nice guy.”