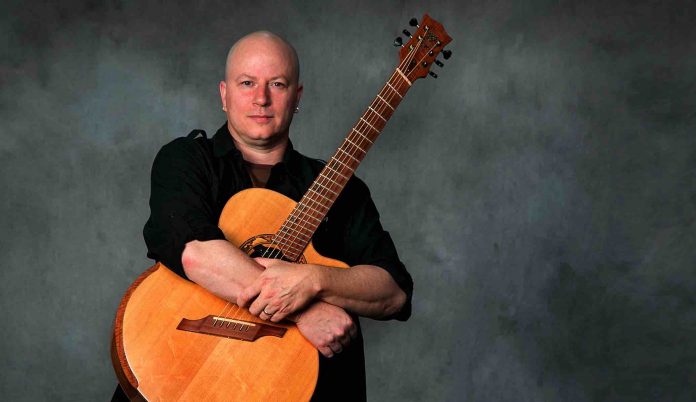 Spencer Elliott of CandyRat Records fame has a new album out on April 8th that I was really excited to have discovered pre-release. It’s very rare to come across a band that has a lot of similarities to a band such as Tool, but all while staying in their own lane and having a very unique sound. What really pulled me into Spencer Elliott was the instrument work. I’ve really been missing a good acoustic-centric project since bands like Days Of The New, and Spencer really picks it up from that era while still staying very current and refreshing, honestly.

A deeper look into Spencer Elliott shows us that the home of the band is on West Virginia. Spencer is really the soul of the band and the heart as well. Elliott is joined by Sean Sydnor (bass) and Chris Hudson (drums) on the illuminating tour-de-force of a new album “SE3”, due for April 8 release via CandyRat Records. Spencer, along with the band set out to throw convention to the wind, opting instead to stir up a wholly unique gumbo of musical layers, drawing equally from prog rock, metal, funk, acoustic, experimental and neo-classical influences.

The band states that fans of artists as varied as Animals as Leaders, Liquid Tension Experiment and TOOL should enjoy this new record.

Let’s get into the tracks off this great record. Off the jump, we have the first song called ‘Torque’. It opens with an amazing little acoustic melody that then travels into a very middle eastern sounding pattern before getting very grungy which is what brought up the Days Of The New feeling that I had on the first listen. The track goes through so many patterns and is a joy the whole way through.

‘Silver Maple’ is the second track which slows it down a bit. The guitar here is more subtle, while still staying as the main focus of the song. These songs are instrumental, so it’s really a great journey to make your own words to. Amazing slower track here.

The third track was a real treat. This one is called ‘The Tournament,’ and I love how Spencer is playing catch with the band. Here, I feel that the drums shine the most. In my opinion, it’s great to see every instrument get their own focus.

The fourth track is staying at the slower pace that the two previous have created which really shows how much time and thought that Spencer put into this project because it’s all so cohesive. The guitar work here sounds great with the slapping being done with the strings and the bass is married here with the guitar making for such a powerfully smooth sound. The fifth track, ‘Rain Shadow,’ picks it up again and really boasts how strong the band can be.

‘Elipsos’ makes up the sixth spot and comes in with a very bright and crisp hi-hat that is closed. This song feels like a total journey, and you really have to hear it to understand what I mean. My favorite so far is this one. For the seventh spot, we have ‘4_20,’ I’m already loving the name, so what can it sound like? Sounds like freedom and a good time to me. This is an energetic track that has guitar work that I would akin to Soundgarden. Another big song here.

Tracks eight through ten may be the strongest ones and that’s saying a lot because of just how fluent this record is all the way from the start. Track eight, ‘Insignificant’ reminds me of some video game music and I hope the band pitches it as such. Track nine is ‘The Wolf And The Hawk,’ the best name goes to this track and it’s the biggest sounding track off the record. With the entire album coming full circle at track ten, we have ‘There’s Something In The Airlock’ which carries this dark and haunting tone that is also bright at the same time. Towards the middle of the track, everything cuts out and is just left with acoustic guitar and that’s a definitive part for this record. There’s something about the drop out that made it hit so much harder.

I truly hope you check out this album and love it as much as I did when it comes out on April 8th. For now, please enjoy the single, ‘Torque’ below.