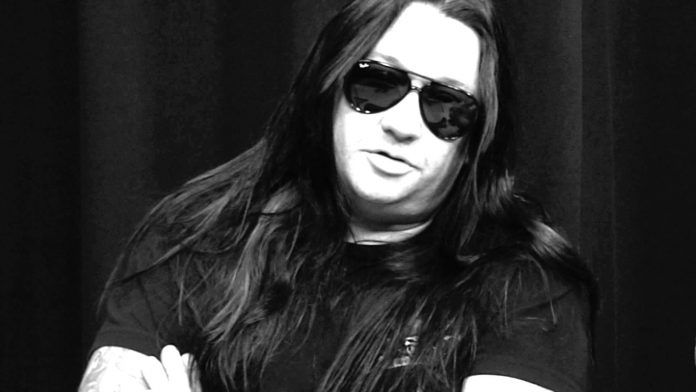 A decade after the release of Black Wings of Destiny – the most recent acclaimed full-length release by DRAGONLORD, the passion project of Testament guitarist Eric Peterson – the wait is finally over for fans of the high-fantasy symphonic black/death metal project. Peterson is thrilled to reveal details regarding the long-awaited third DRAGONLORD album, entitled Dominion. The album is scheduled to hit stores on September 21, 2018 via Spinefarm Records, and will feature eight tracks of devastatingly unrelenting black and death metal assault. Digital and physical pre-orders are live today here: Physical + Merch | Digital

Get your first taste of Dominion now by streaming the album’s title track via a new lyric video here:

DRAGONLORD mastermind/vocalist/guitarist/bassist Eric Peterson says: “I’m super stoked for you all to finally hear “Dominion”! This song has all the arsenal to engage any metal appetite! From the first drum cannon-walloping performed by Alex Bent, to the melodic discorded sounds of my guitars and haunting choirs performed by Celtic singer Leah, entering in my lyrical blackened satanic tongue followed by unholy orchestrated strings and violas performed by Mr. Livingston – this song has it all! A beautiful violent storm whirls your way! Breaking down to two old school influenced guitar solos voiced before and after some cleaner melodic singing, only to be sucked back into the vortex… Enjoy!”

Dominion features Eric Peterson on vocals, guitar and bass, Lyle Livingston (Psypheria) on orchestrated keys and pianos, Alex Bent (Trivium) on drums, and notable fantasy metal singer Leah – who has performed/recorded with members of Blind Guardian, Nightwish, Delain and others – on female vocals and choirs.

As aural the gates to Dominion creak open on the first track, “Entrance,” you descend into the dark world of DRAGONLORD and there’s no turning back. Dominion explores themes of darkness owning and influencing these times we now live in, and things that have come to pass. It also delves into other eras, real and imagined. The pummeling begins with the title track, “Dominion”, welcoming all who dare enter into an eternity of misfortune. Then it’s into “Ominous Premonition”, which Peterson likens to “the soundtrack to the gates of hell”. The track “The Northlanders” is about brutal 11th century Northmen, while “The Discord of Melkor” will thrill Lord of the Rings fans with an untold tale– “my take on Tolkien’s “Silmarillion,” the first age of the Lord of the Rings saga genesis,” says Peterson. Then there’s the surprise of the slower, Black Sabbath-influenced duet with “my amazing Celtic vocalist friend and collaborator Leah,” Peterson explains about “Love of the Damned,” an abstract piece that still explores a love story – with the devil, of course. “Almost like a switch-up story of if Beatrice from “Dante’s Inferno” did fall for the Prince of Darkness!”

Dominion’s eight songs create a deep and heady musical journey rife with meaning and menace, from the blackest and loudest recesses of Eric Peterson’s mind. If the road to Dominion was long, it’s only because Peterson strives for perfection. “The biggest obstacle was getting the vocal patterns and lyrics right; telling the story of the music. Maybe I was a little too picky, but at the end of the day I’m glad we didn’t settle for things that I wasn’t feeling right about.”

Eric Peterson is tuned to E Flat on Dominion, and used his two favorite Les Pauls for rhythm and some solos; his Ritchie Blackmore Fender Strat for other solos, as well as his signature Dean Old Skull Flying V. “I used a lot of different guitars to get various sounds. I didn’t want my tone to be too close to Testament, but wanted to still maintain my signature sound. I really felt I needed to lay down the kind of stuff I do on my own – but not necessarily on records,” he explains. “I’m pretty stoked of the outcome on the soloing end.”

Peterson formed DRAGONLORD in 2000 as its singer and guitarist (with keyboardist Lyle Livingston and now-ex-members Steve Di Giorgio of Testament and Jon Allen of Sadus), and notes that the growth from DRAGONLORD’s first two records to the cinematic triumph and brutal blast-beats of Dominion has been immense. Dominion’s stellar, complex, brutally symphonic metal is triumphant in its execution, bringing together layers of meaning and musicality into an unholy whole.

Dominion will more than satisfy the legions greedy for DRAGONLORD’s beautifully pulverizing metal. Within the highly detail-driven but heavy-as-hell band, Peterson has total dominion.

I was recently able to speak with Eric via phone. We discussed(in a deep voice) this new album and comic.

How would you compare this album to the last two?

Way different. When I put out the first  one I was bitten by a black metal bug and it all just happened so quickly. Second one was more of a transition from being just a quick project to use becoming an actual band.We actually did shows and festivals and all the members had influences. This album is made up of ideas we had since 2010 or 2011 and the writting process was very spread over time. We then finally found the time to make this record. We slowly got each member to do their part and something good would always happen.

Tell us about being bitten by this black metal bug

Ive always liked this kinda music. Back when Testament was called Legacy we wore corpse paint. I was always into darker stuff like Celtic Frost,Angel Witch and Mercyful Fate. As the band evolved we became more of a melodic thrash band. In the mid 90s I got into Dimmu Borgir,Emperor,Old Man’s Child and Bathory. I love classical music and one day it hit me to form a band that does classical music influenced extreme metal. It reminds me when a twister destroys everything in a movie while classical music plays. I was also so into that style but didn’t want to force it onto the next Testament record so Dragonlord was born.

Tell us a bit about your comic Burner?

Any other ways to promote this album?

The album comes out September 21st and we are bit by bit releasing a documentary on how this record came out. We will also be shooting more music videos. Depending on which songs the fans like most when the record comes out, we will chose what the next video might be.