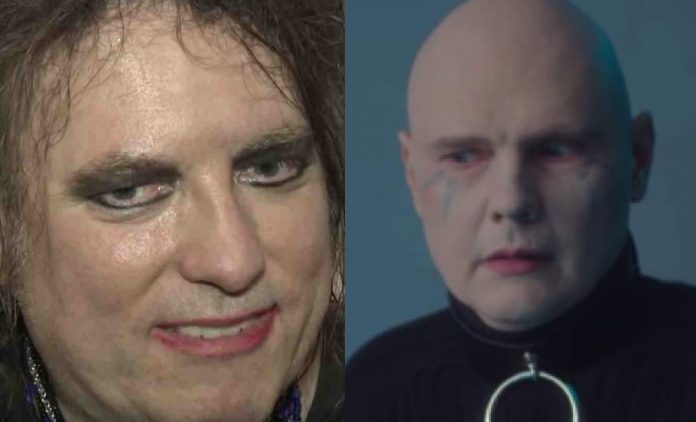 Smashing Pumpkins frontman Billy Corgan revealed in a recent Instagram story Q&A that 2019 Rock and Roll Hall of Fame inductee Robert Smith of The Cure fame one vomited on his shoe. Below are highlights.

A girl sitting besides me puked down my leg at the SP Toronto show. Best moment of my summer 2018.

Now that’s rock and roll. Robert Smith once threw up on my shoes.

Yes. Apparently they took a massive vape hit of weed.

It’s been a huge year for the band, has one moment stood out from the rest?

I’d say the Madison Square Garden show. To make it back there 21 years later, and have the show sold out to the rafters, and the band in tip top form with a great audience in the toughest market to please. Amazing.

May be an odd Q, but curious if you believe in a hell? Why or why not?

I do not believe in hell as it’s portrayed generally. But I believe there are forms of demonic servitude that follow us (hell on Earth) or into the afterlife.

Do you think you’ll ever go back to playing post-Machina songs live with James again?

That’s up to fans, really. Not up to us.

Well, if it’s up to the fans, I’ll start. Would love to see Zeitgeist material join the set one day.

I’d venture to guess that if you had 100 SP fans in a room only 5 would know Zeitgeist songs.

What was the best part of conceptualizing and making Zeitgeist?

Being told that the themes on the album of digital intrusion into our daily lives was paranoid and tin foil hat shite.