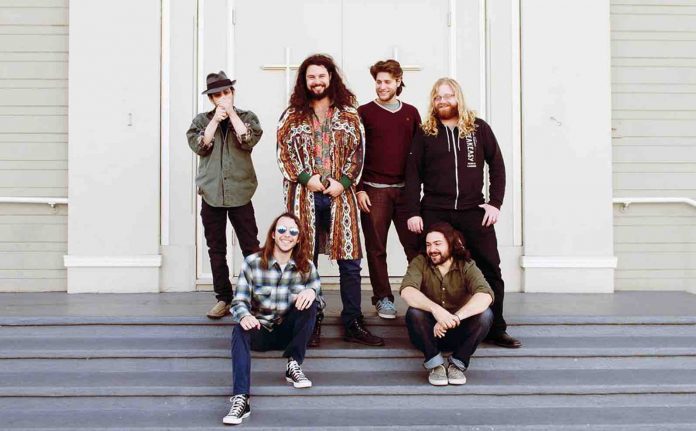 Filled with otherworldly, wicked guitar work, a punchy rhythm section, dizzying keys and one hell of a top notch vocalist, The General Maynyrd Band are the epitome of what a fantastic band could- and should be. Without batting an eye, the Bay Area seven-piece combine equal parts progressive rock and psychedelic rock to create a mesmerizing sound all their own. One thing you immediately recognize when listening to their recently released, ten song eponymous album is that for as out of the box these genres can be at times, they have found a way to add a slight pop tinge that further enriches their glorious sound.

Think Frank Zappa and The Mothers of Invention but with a crisper, more focused attack. Losing nothing on the awesome factor but gaining tons of ground on the accessibility. The album flows with a mellow intensity not unlike classic Pink Floyd albums of the 70’s. The ten songs provide an atmospheric landscape that keeps you guessing yet delivering with fantastic payoffs. No song keeps the guessing going more than album closed “No End” which takes a wild left turn at the halfway mark. The track glides into a percussion dominated section that proves the perfect setting for the albums greatest guitar solo.

The mark of a great band is when you realize that individually, you have a collective of virtuosos coming together to create something spectacular. Less like other bands and more like a musical version of The Avengers, The General Maynryd Band serve the greater good first- in this case, the song- while still offering up ample opportunity for each member to take the spotlight and shine. Whether the flurry of keys and straight up nasty bass on “Catch a Pirogue” , the intoxicating guitar work on album opener, “Talkin’ to My Fish” or the vunerable yet powerful vocals on “Trouble is My Business,” each member of this band just amazes over and over.

With this album, The General Maynryd Band show unmatched musicianship and confidence in their craft. Bands- and albums like this are what music is all about. The journey. The discovery. And the emotion. Regardless of personal taste, if you’re a fan of good music, then this needs to be the next album you check out!