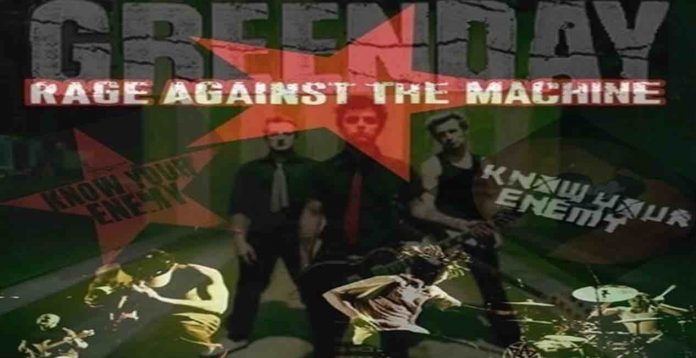 “I’ll tell you, that’s not an accident. When I was in that band, the Electric Sheep [featuring future Tool guitarist Adam Jones on bass], I didn’t cut the strings of my guitar because I thought it looked cool.

“Years later in Rage Against the Machine, I was in the baddest band in town, and so I let my strings go.”

You look at a guy like Billy Joe Armstrong from Green Day, he wears his guitar down almost to his knees, it’s super cool, but you do keep your guitar up high, you’re like, ‘Fuck cool,’ right?

“The guitar is at exactly the same height that it is when I’m sitting down and practicing, so it’s like, it’s able to reproduce the exact circumstances under which I’ve been practicing, and I recognize it’s not cool, but that hasn’t really been a huge priority.”

Is it important to you what type of guitar you play?

“No, not at all. And this is controversial in the world of guitar players – I don’t believe it matters at all, and none of the gear matters whatsoever. Like, with me, this was probably 1988, I went in, I spent a few hours twiddling some knobs, and I just said, ‘I’m done, I don’t like this sound particularly, it’s not what I’m imagining in my head.’

“But I’m sort of obsessing and being anxious about it. I’m gonna never think about these knobs again, I’m never going to think about this guitar again. These are the settings, I’m now just going to worry about being creative with the sound that I have.

“And – it’s right over there [JCM 800 Lead Series], it’s a 50-watt Marshall head, which is what I bought at the time, and the settings I marked on that day in 1988, the amp is still set to those settings, the guitar is the one I that I’ve played on every record and every show, every tour, and I just said I’m no longer going to burden myself with this, ‘I have to have the right gear and I have to have the right guitar.’

“It’s like I got the guitar I got, and now I’m going to put all of my energy into imagination, creativity, same with a guitar effects pedal, I have three, there are three pedals for 35 years that are the same ones that I’ve just applied myself to by embracing those limitations, helped me tremendously creatively, because I’m never going to worry about that stuff.

“The beginning of Rage Against the Machine really for me was the turn where it went from being a technically skilled musician to becoming an artist, and I found my own voice on the instrument when I began self-identifying as the DJ in the band.