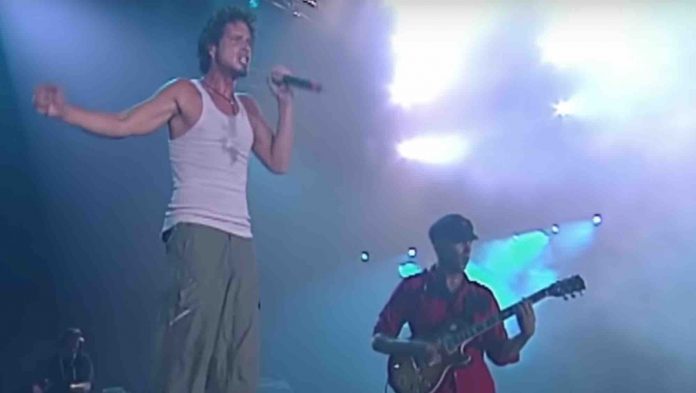 Former Audioslave Rage Against The Machine guitarist Tom Morello was recently interviewed on The First Time on BBC Radio. He discussed how he he found out that Chris Cornell died on May 18, 2017, describing his wife receiving a phone call and informing him in the wee hours of the morning. Alternative Nation transcribed his comments.

“I was at home, it was about 1AM, and my wife had the phone and she had that look on her face, that awful look when you know something really bad happened. I just kept saying to her, ‘Who, who?’ Then she finally said, ‘Chris Cornell.’ [I said], ‘No, come on, that couldn’t possibly be true.’ But yet it was. The last time I saw him, he was shining.”

Morello told Navarro, “I might have told you this after Chris, be ever vigilant, and if you ever need to call somebody, call me.”

Navarro responded, “I will.”

Morello said, “This is the last serious thing, but the last time I saw Chris, he was shining. He was great, he was as great as I had ever seen him. He was completely fulfilled and happy, in career and family, so you never know. It’s always there somewhere, so if it ever surfaces, give me a call.”

Navarro asked, “So there was no indication?”

Morello responded, “I saw him in January, he passed in May. The intervening months I don’t know.”

Tom Morello discussed the final Audioslave concert with Chris Cornell in January 2017 at the Anti-Inaugural Ball in Los Angeles in the liner notes for the new Chris Cornell career retrospective album.

“As much as Chris was a bandmate and friend I never stopped for one second being a huge FAN of his artistry, of his smile, of his ridiculously beautiful hair, of his love of family and of his willingness to help others.

Audioslave reunited at the Anti-Inaugural Ball in January 2017, if only for three songs, if only for one night. It was the last time I saw Chris and what an honor to stand next to his feral rock fury and soaring vocals one last time. He was just SHINING. Looking back on that night and looking back on these records I deeply appreciate that Tim and Brad and I were so blessed to play music with the great Chris Cornell.

So thanks Chris for your beautiful voice, your friendship, and all these world crushing songs.”