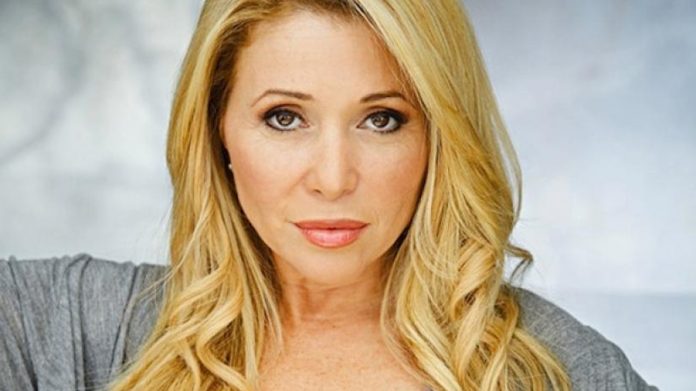 Elizabeth “E.G.” Daily is a woman of many talents – an accomplished actress since childhood, singer-songwriter, and voice actress behind iconic characters such as Tommy Pickles on Nickelodeon’s Rugrats and Buttercup on Cartoon Network’s The Powerpuff Girls. Today, E.G. released the music video for her newest single, “So Pretty“, and is launching an ambitious marketing campaign and movement, an effort to redefine what constitutes “beauty”.

“I want to continue being a viable messenger for the supportive things of the planet,” E.G. told Alternative Nation. “I’m also really happy continuing my art. I want to convey a message of being able to focus on your art no matter your age or where you’re at in life. That’s ultimately the big message with this whole thing.”

Check out E.G.’s Kickstarter campaign for the movement. Read on for a Q&A with E.G., touching on everything from her early days as an actress and singer, her current plans for the “So Pretty” movement and its crowdfunding campaign, and her involvement in the upcoming reboot of Rugrats recently announced by Nickelodeon.

On her musical influences and tastes: I had older brothers and sisters, so I first got introduced to stuff like James Taylor and Joni Mitchell. The singer-songwriters were where I really learned so much from early on. I started to realize that I truly love these simple songs and beautiful lyrics. So, it started there, but then I started getting into the Rod Stewarts and Tina Turners of music because I have the that same edge in my voice; I really resonated with them and that kind of power. I came across a man named Nate Fillmore, who really led me to Aretha Franklin and some of the other real classic soul singers that were so brilliant. I had built up that kind of foundation in music. Nowadays I’m all over the place; I’m a big fan of new artists like Coldplay and Lifehouse now and the list keeps growing.

On her experience growing up in 70’s/80’s Hollywood: Back when I was growing up around the age of 15-16, I was playing in lots of clubs on the Sunset Strip. I was in different bands and a regular in the same clubs. We didn’t have cell phones back then, so we couldn’t use filters to make ourselves look perfect like we do now. We didn’t have to worry about having the higher pressure to make ourselves perfect to become our own person. So, the beauty of back then was that there were more to being present without having a phone and actually living your life. I don’t know, there’s just something about it that was great in which I wish my kids could have that they didn’t get to experience like we did growing up. I think the definition of beauty has changed over time. Today beauty is having so many things, like having your booty enlarged or having your lips done. It’s constantly changing, so that’s why my ‘So Pretty’ song is more about doing work on the inside, so you can actually feel your beauty on the outside.

On her music career: I had ‘Say It, Say It’, which was the number one dance hit along with the some of the Madonna stuff back then. The true artist I always was as a young girl, was a singer-songwriter. I felt happier when I would play my guitar and sing my own songs. I felt most connected to music when I was writing about how I felt about things and my experiences. I noticed overall that I was always going to go back to be a singer-songwriter.

On the legacy of Rugrats: I had no idea how iconic this show would become and we just started doing it season after season. We had no idea it would get so big, but we just knew it was really well written with an amazing director and team. We would celebrate when we got pickups after pickups and then we just won an award, Emmy and then the feature film. It happened slowly around us and was a very slow and steady thing.

On what “beauty” is and how she wants to change it: The way the song goes, it’s almost like you could be as beautiful as you can be on the outside… but really, if you aren’t feeling good on the inside, then you will not feel your beauty on the outside. And then you might work harder to feel more beautiful on the outside. But in reality, most of the work needs to be done on the inside. I think people are most beautiful when they aren’t trying so hard to be beautiful and they’re just being themselves by being goofy and more fun. I’m just trying to encourage more self-care, self-love and inner work; more about learning to tap into what makes you feel beautiful on the inside, so you can feel your beauty on the outside. Sometimes that could be about getting clarity in your life about what’s making you happy and what isn’t. Which people who are in your world that aren’t making you feel good about yourself and the job you are in where they don’t treat you kindly. All those things affect how you feel on the inside no matter how beautiful you are. The message for me is how we support each other, and you get to define the inside. Clarifying what is really working in your life is what defines the beauty.

On bringing her daughters into the “So Pretty” video: I brought my daughters in because every day we work on ourselves and work on self-love and encourage each other to be the best we can be. They’re beautiful girls, but they know beauty starts on the inside and that’s the kind of message we are all trying to support each other with. If I come home and I don’t feel good from work or just in an overall downer mood, then my daughters ask me what’s going on and they know that when I start talking about what’s happening on the inside, I will start to feel better. My girls are millennials and I wanted to include them in my message because it affects all ages, men and women, in trying to objectify yourselves to feel better. We did a questionnaire with people and we got as many men as women to answer the questions. It’s amazing the length people will go to be beautiful, even if its dangerous to be beautiful.

On what her Kickstarter is trying to accomplish: I’ve already financed everything from video production to advertising. The extra money is for two things. I think it’s better to have a team of people, and being that I’m not on a label I thought it’d be fun to have my fans be a part of the process. I kept getting asked when I will have another song come out, and I felt like this message was so important it had to be the one to launch. The funding of it will help to have the video become a message so we can earn more money for charities that match and mirror that same message.

On her upcoming live performances: We’re going to have the fan-backers [of the Kickstarter campaign] join in, have appetizers, and do a private Q&A after the concert as thanks for having helped spread the message of the So Pretty campaign! We can talk about anything, whether it’s about the journey, voice over, acting or entertainment and allow it to be an educational thing. We will wait for the song to blow up then throw a party event. Its going to be very informative for everyone, including the fans.

On the recently announced Rugrats film & TV reboot for 2020: I can’t say much other than its going to be amazing. I know the creators are super excited. We haven’t heard from them, but I can’t imagine that they aren’t going to use us. I love the show and it’ll be all perfect, just like how we met.