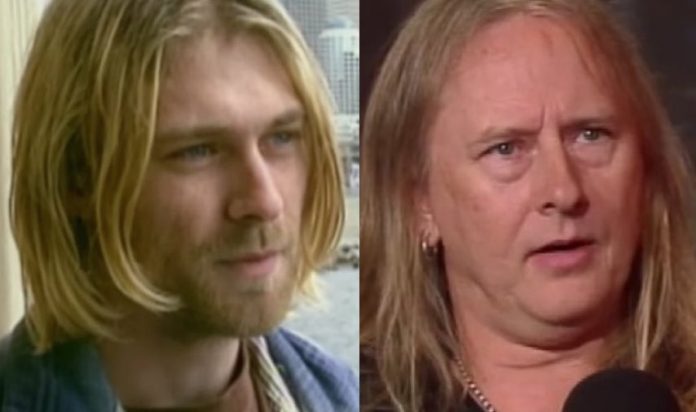 Let’s just be honest here for a second. Guitar solos kick ass! Name me a great song that wasn’t made better by a fantastic guitar solo. Trick Question! You can’t do it because it is a fact of music and a fact of life that a face-melting burner of a guitar solo can elevate any song from great to iconic. Guitar solos can be as varied and wild as the guys who perform them. Some guitar solos are in your face, immediate, straight for the throat gems. Others come off like a rollercoaster, full of hills and valleys and  accentuated by feel. Others are straight up, note for note vocal melody lines played on the guitar. Take your pick but regardless of your definitive taste, we can all agree that like pizza, there’s no such thing as a bad guitar solo.

With that said though, there are a hell of a lot of great ones. During the 90’s, rock, alternative and metal saw guitar solos fade along with the rise of Nu-Metal. But regardless, the decade had a ton of great guitar solos- and great guitarists may I add. Here is Alternative Nation’s Top Ten Iconic Guitar Solos of the 90’s!

Silverchair’s “Tomorrow” is one of the best songs of the Grunge era. Sure their sound on Frogstomp was a little derivative of some of Grunge’s forefathers, but the three members of Silverchair were sixteen years old when the album came out. Seriously, they were sixteen! Not a bad solo for a kid barely old enough to drive!

Stone Temple Pilots may have been a bit late to the whole Grunge explosion but one thing is for sure; these guys know how to rock. With his meaty riffs and interesting chord choices, Dean DeLeo really shined when he would just let it rip. Every STP song doesn’t have a solo. But here, the quality far exceeds the quantity and “Vasoline” shows DeLeo at his best.

Billy Corgan is often considered one of the greatest songwriters to come out of the 90’s. And that is a fact. A well known fact you cannot dispute. But a lesser know fact, or at least lesser known discussed topic is his fantastic guitar work. “Cherub Rock” shows off Corgan’s swift ability to blitz your senses with some truly fantastic fretwork. The recognition his guitar work gets may fall short of his songwriting but that’s only because the man penned some of the greatest songs in the history of rock.

Tom Morello is without a doubt the number one innovator of the 90’s on the electric guitar. Like Eddie Van Halen and Jimi Hendrix before him, Morello found a new way to use the instrument and in that, created some of the absolute best riffs and solos of the 90s. With “Killing In the Name Of”, Morello slays with a sea of Digitech Whammy pedals shifting octaves allowing him to create the sound of a DJ scratching with his guitar. We could do a whole list on just Morello’s best riffs and guitar parts.

This one is a little metal but no doubt iconic. In fact, within this guitar solo, you can learn everything you need to know about the one, the only, Zakk Wylde. His runs are lightning fast. In a world where guitarists go nuts with hammer-ons and pull-offs to pick up speed, I swear to God Zakk has the fastest right hand in the business. If you listen to a lot of his work with Ozzy or Black Label Society, you will often hear a kind of “whooshing” sound during the big guitar solos. His right hand and his attack is so fierce it creates this sound- along with the rest of the truly wonderful sounds of the guitar. Zakk also gets points for his iconic Bullseye Gibson Les Paul.

Jerry Cantrell is a machine. From singing, to writing songs, to riffing and to soloing, the guy can do it all. Cantrell has provided rock fans and guitar enthusiasts with no shortage of great guitar work over the years but it was on “Man In the Box”, from the band’s debut Facelift that Cantrell announced his arrival. The wah-wah and almost country like quick licks are ridiculously awesome and it in a career of awesome guitar solos, Cantrell never topped this killer introduction.

The foundation of the sound of Grunge was built upon the shoulders of Pearl Jam guitar duo Stone Gossard and Mike McCready. The two perfectly compliment each other and are an audible force to be reckoned with. Pearl Jam’s debut album Ten is loaded with great guitar work but it is on “Alive” that McCready takes center stage and dazzles with his fretwork. It’s crazy how this solo just makes the song. McCready’s solos are often like mini-compositions within themselves and that is a characteristic not enough guitarists shoot for.

By time Metallica released their eponymous 1991 album,  The Black Album, Kirk Hammett was firmly established as lightning-fast shredder with a knack for mixing tapping, arpeggios and the Minor Pentatonic scale along with some modes for good measure. What’s fascinating about “Enter Sandman” is that the song’s instantly recognizable main riff was written by Hammett as well. From the first note, this solo just takes you on a ride. A fast, chaotic ride full of twists and turns and some great wah-wah action. It’s crazy but by slowing down a bit and simplifying things, Hammett, along with Metallica created their best known song. And his most iconic solo.

Slash himself is probably more iconic than any of his actual guitar solos. When it comes to the guitar, he is a God among men. Down and dirty and bluesy and beautiful, Slash has such a distinct sound that from one note you immediately know- and are thankful- it’s Slash you are hearing. Slash’s Gibson Les Paul is just as synonymous as his top hat. On “November Rain”, we get three solos. You can take your pick. But for me and the purpose of the list, I’m jazzed about the solo at the end of the song. Slash’s killer lead sound is on full display with his use of the bass pickup and the tone turned way down. It’s just so Slash. The end of “November Rain” is to me the epitome of everything great about Guns N’ Roses. We get some nice piano lines, Izzy’s excellent guitar work, driving rhythm section, great Axl Rose vocals and just an absolutely punishing, frighteningly fantastic guitar solo. God damn. I take my hat off to you Slash!

The man. The band. The song. The movement. Kurt Cobain simplified approach to his guitar playing is the very thing that makes it so damn good. His song-writing is so on point that often times, there’s no need to over-complicate things with an elaborate guitar solo. “Smells Like Teen Spirit” is a great example of this. The solo follows the melody of the vocal line with some Chorus effects in there to add a little flavor to it. “Smells Like Teen Spirit” defined a generation. This guitar solo is no different. Kurt Cobain the guitarist inspired a legion of people to start playing guitar. And this solo can really be looked at as the catalyst for that. Using quirky Fender designs like the Mustang and Jaguar only made him more appealing.  In our musical climate today, you can’t help but wish that someone like Kurt Cobain would come and set the record straight and get everyone back on board the way Kurt really did in 1991. The influence of Kurt Cobain is as sorely needed today as it was in 1991.