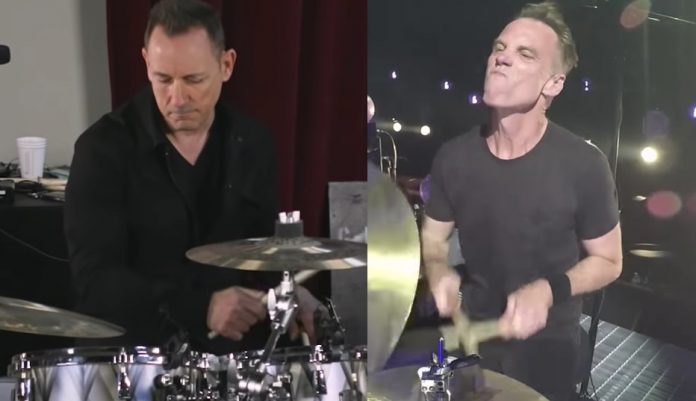 Drummers! For whatever reason, drummers rarely get their due. Often times, the difference between a good band and a great band comes down to the man behind the kit, keeping the nonstop onslaught of rock a float while virtuoso guitarists and song-writers get to shine. That said, I think it’s about time we give a shout out to these musical maniacs slamming away all in the name of driving the music to its full fruition. Throughout metal, rock, grunge- call it what you want, there are an absolute ton of awesome drummers. For you drumming enthusiasts and fanatics, here is the definitive ranking of rock’s greatest drummers!

Let’s be honest for a minute- Dave Grohl could be number one on this list. Between Nirvana, Queens of the Stone Age, the insanely overlooked Them Crooked Vultures and his work on early Foo Fighters records, Grohl’s legacy as a real life drum machine is firmly cemented in rock ethos. IF you’re looking for a definitive Dave Grohl drum track, I’ll throw you a curveball. The wild, “Don’t You Know What You Are” from Nine Inch Nails’ With Teeth  is an absolute must for anyone looking to get their heart rate jacked with some awesome drumming.

What can be said about Jane’s Addiction that hasn’t already been said? The alt-rock juggernaut are innovators in every sense of the word. Their chaotic brand of rock was ahead of its time and from a drummer;s perspective, Perkins laid the foundation for Perry Farrell, Eric Avery and modern-day guitar hero Dave Navarro to bless us possibly the best one-two punch of two albums to start a career we’ve ever experienced. “Ted, Just Admit It” perfectly showcases Perkins’ out of the box rhythms and unique drumming at its finest.

Green Day have solidified themselves as one of the greatest bands of our generation not only with their razor-sharp political commentary but with their absolutely insane intensity. For fans that have grown up with the post American Idiot styling of the punks, you’d be well served to take a trip back to the 90’s and give Insomniac another listen. Insomniac carries a darkness and sarcastic approach that is all too missed in music today. And Tre Cool leads the charge with his off the wall drumming and lightning, blink and you’ll miss drum fills.

Following Ten, Pearl Jam were tasked with matching the unprecedented heights their near perfect debut set. A mighty task, no doubt. But with the fantastic Vs. and Vitalogy, the grunge legends proved they were more than up to the task. On his two albums with the band, Abbruzzese solidified himself as an alternative rock legend. To look at his drumming solely is a massive undertaking as he wrote one of Pearl Jam’s greatest songs, “Go.” A drummer with that skill behind the skins and that knack for song-writing is every band’s dream.

With their unique blend of rock, metal, rap, reggae and alt-rock, 311 are a band unlike any other. Among a plethora of identifying characteristics- Iron Maiden-ish guitar harmonies, a double vocal attack that pre-dated Linkin Park and massive hooks for days, Chad Sexton’s instantly recognizable snare drum sits atop that mountain. The ability to switch genres and perfectly articulate what a song needs is Chad Sexton’s gift to the music world.

If you could think of a drummer as a gorilla, Jimmy Chamberlin is your man. Throughout the 90’s when Billy Corgan and company became the voice of a generation’s disillusionment and alt-rock aggression, the man who helped the Pumpkins rock harder than possible was Jimmy Chamberlin. Pounding, crushing and pulsating, Chamberlin’s drumming provided the perfect back beat for one of rock’s greatest songwriters- and of one the defining acts of alternative rock.

To think back to when Blink 182 really burst the doors wide open to pop-punk glory, it’s a wonderful stroll down memory lane. Along with their addictive knack for crafting instantly sing-alongable hooks and just enough sophomoric humor to really wet the appetite of teens and young adult men alike, Travis Barker put on a drumming clinic. I’d argue that Barker’s ability as a drummer is what separates Blink 182 from a wealth of lesser bands, trying to replicate the formula but with no such success.

The man east drums for breakfast. In Anthony Keidis’ autobiography, Scar Tissue, he remarks that is how Chad Smith was described to him. And honestly- is he wrong? For the last thirty years, Chad Smith has taken his classic rock influences and filtered them through a funk-rock spectrum to set himself up as one of the most influential drummers of a generation. And- along with his doppelganger  Will Ferrell, he has gone on to take the piss out of rock-star ego and put their good fortune to good use. You gotta love a guy with a great sense of humor and the ability to absolutely slay his instrument.

Tool may not be the epitome of Alternative Rock but whatever. Tee wildly mysterious and awe-inspiring Tool have built a career on making intense hard-rock all while showcasing themselves as the absolute pinnacle of forward-thinking musicianship. His effortless ability to change time signatures is unmatched among his contemporaries. He is a god among men and truly sets a ridiculous bar for aspiring drummers. And Tool! Come on, there has never been, is not and never will be another band like them! Even if we don’t get that long awaited new album, the man and the band are as good as it gets.

Listen, if you can be the drummer in one of the most influential bands ever, you know you’ve done something right. But- what if you are the drummer for two? If you’re wondering how that honor feels, just as Matt Cameron. His work with Soundgarden defined him as one of the all-time greats. But to follow that up with what he has brought to Pearl Jam- well that, that puts im into the stratosphere. And- the man has been known to write a song or two! His contributions and his legacy preceded him Matt Cameron, folks, he is the Alternative Rock’s Greatest Drummer!