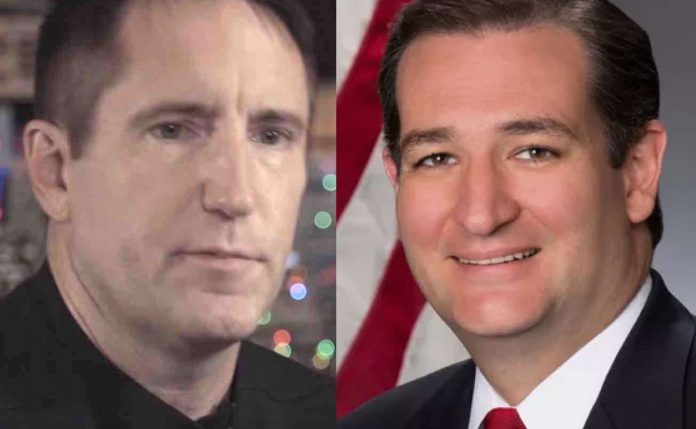 “Who voted for Ted Cruz? See the lights aren’t on, I can’t see. Is there any way to turn the lights on? I’d like to see. Raise your hand, you guys, nothing to be ashamed of, just checking. He might be here tonight, he was bugging to get on the guest list, and I told him to fuck off. We put him on a few years ago, he drank all the beer, and was just a pain in the ass to be around. Can’t hold it against you.”

Steviejanowski99 commented on the NIN Reddit, “I’m glad he voices his opinion. After all he has created and all of the hours of enjoyment he has given my ears, I feel like he is more than entitled to that—whether I agree with him or not (I do here).

I don’t complain when the singer for Eagles of Death Metal spouts right-tinged viewpoints. I still buy their records. Everyone is entitled to an opinion..artist, chef, doctor, professional wrestler. If you don’t support their opinion and it offends you, don’t buy their work, don’t support em. Otherwise, rock on.

Edit: And this is actually super mild when it comes to political commentary. I saw Neil Young during the Bush administration…you want to talk about an uncomfortable crowd? Look up some youtube videos.”

_Ripley commented on the NIN Reddit, “I was kind of ready for him to mention Trump in NY, but I suppose he knew he’d be preaching to the choir. I’m glad he didn’t, I don’t go to a show to be inundated with politics like we are everywhere else.”