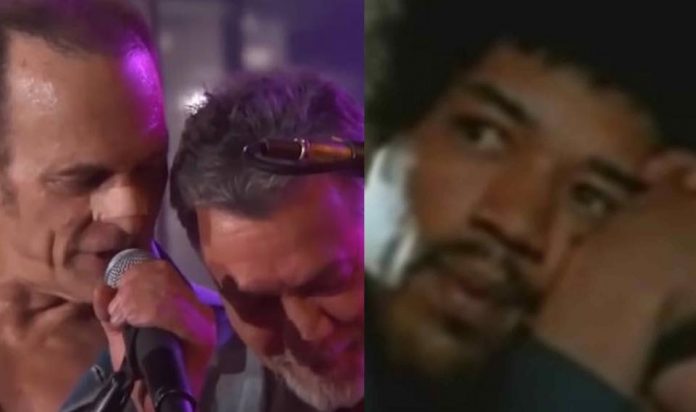 Maron: Did you play on Ice Cream Man?

Roth: Yeah, that’s me – flat pickin’ on an open tuning, alright? That kind of music was ingrained in our DNA and we were unaware of our that we were learning from seventy-five year old sharecropper, wanderer, men strolled traveling musicians. That was just cool stuff. There was a huge blues explosion in the sixties when Jimi Hendrix, The Grateful Dead, and The Doors were all happening, but at the exact same time you had B.B. King, Albert King – there were a lot of Kings.

Maron: You had John Hammond downtown too.

Roth: Oh everybody, John Lee Hooker came back around, Howlin’ Wolf and Muddy Waters and all of Keith Richards’ current record collection.

Roth: And I know you may disagree.

Roth: Oh, kind of in that transitional phase.

Maron: When you are out here in Pasadena, when do you start singing, like with the band, with a band?

Roth: Well first time, I think I was – well, there is a phase, in your life, when you’re going to have all of your friends either, if they are Spanish-speaking they are having Quinceañeras or they are having Bat Mitzvah parties. Every Bat Mitzvah, every Spanish speaking anniversary or wedding would have a combo. This is how Van Halen started, we would play so times at Maharis Mexican Restaurant in the parking lot for every event that happened.

Roth: Oh yeah, we were named something else, we were called Mammoth at the time but the band was [the same]

Maron: And you were doing covers?

Roth: Oh yeah, nothing but covers, nobody wanted to dance to original music. [laughs]