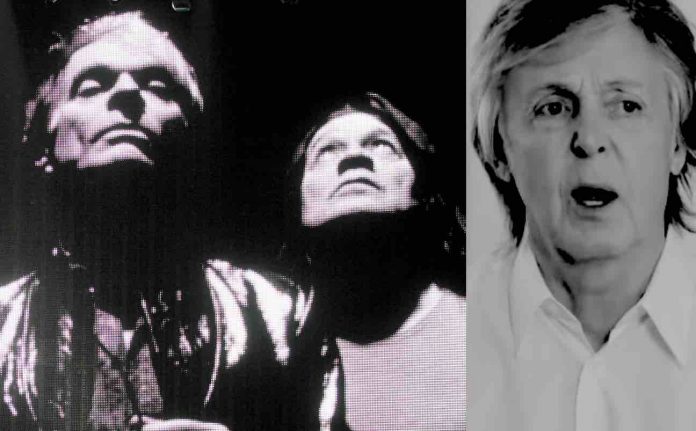 In a new interview with Joe Rogan, Van Halen frontman David Lee Roth revealed the truth about how Paul McCartney and John Lennon created the dark sound within The Beatles, and how their balance helped create it. Alternative Nation transcribed Roth and Rogan’s comments.

Roth: We will do it in the old Beatles style, here is the best way to go for somebody that’s interested [in Jazz]. The old Lennon note and McCartney note. The McCartney note is always kinda happy. I’ve actually bumped into Sir Paul over at Henson Studios and he’s really happy.

His note would be something along the lines of… [Roth sings happy song notes] Hear how pretty that sounds? I’ll do it again…[Roth does it again] Lennon? He’s the salt in the caramel, baby. He’s got it. There’s a darkness, there’s an edge, there’s a shadow. Listen to the last three notes…[Roth does a darker version of the happy song notes]

Roth: There’s a darkness among those last three notes. That’s where you get a little bit of pepper in the chocolate, ya know. [Roth repeats] It’s a little wistful, a little melancholy and when you put them together it doesn’t sound like they do but if I could I would sing both parts and it goes together. Bittersweet like my fucking career [Roth and Rogan laugh]. Like my last three relatio-here we go!

Rogan: So you kinda have to listen to jazz like you’d taste wine?

Roth: The best for this is Thelonious Monk, the same thing, the right hand is Paul, the left hand is John, it’s working and you can’t tell is it happy or sad? I don’t know how was dinner last night? Same! It’s indicative of what’s around you because it’s not just happy, that’s Disney. It’s not just sad, think of someone just tuning his guitar to sad, think of Leonard Cohen. [Roth imitates Cohen] That sounded more like Bowie but whatever.