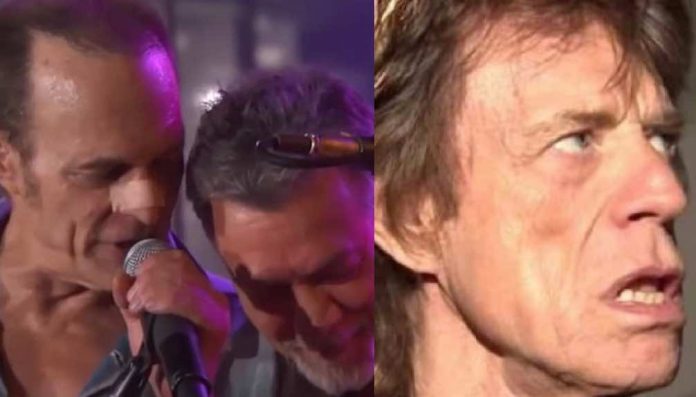 On a recent episode of The Roth Show, Van Halen frontman David Lee Roth had some high praise for Mick Jagger and The Rolling Stones, which should flatter Jagger after his recent health issues. Alternative Nation transcribed Roth’s comments.

“Armin Van Buuren sends us a track and it’s a remix, I’m hesitant to use the word dance because that’s hyper-specific for a neighborhood that is no longer specific. It used to say rock and roll, and that meant [The Rolling] Stones, [Led] Zeppelin, etc.

You could count it on two hands and that’s the classic rock regime. Today it’s everything from Metallica, to the most extremes such as the Red Hot Chili Peppers, Van Halen to Toto. They all list in the rock and roll department. That’s a lot of t-shirts in a single drawer, and when you talk about ‘danceable’ music it’s about fifty-five different genres. Go to beat port, we resort to beat portal and there’s gotta be fifteen different categories that reflect when you do this with my hips [Roth dances].”

The Rolling Stones frontman Mick Jagger recently underwent a successful ‘TAVR’ heart operation, and a doctor discussed how patients like Jagger’s hearts are ‘too weak’ and they need the help from the surgery in a new WNDU interview.

Patients with aortic stenosis become unable to live a normal life because they’re too weak.

“There’s a will for patients to do what they want to do, but there’s a huge inability to do that,” said Dr. Amjad Syed, a cardiothoracic surgeon at Elkhart General.

The disease is the result of a narrowing blood vessel in the heart.
The physicians say the debilitating condition can force blood into the lungs.

“They have significant shortness of breath. And for them, they are not even able to perform their activities of daily living, in terms of bathing themselves and cooking or shopping,” Syed added.

Thankfully, Transcatheter Aortic Valve Replacement, or TAVR, is a minimally invasive surgery giving patients their lives back. TAVR repairs the damaged valve by wedging a replacement where the old one used to be.

Mick Jagger’s girlfriend, Melanie Hamrick, shared with Us Weekly that the singer is on the upswing after undergoing heart surgery on April 5.