A fan has purchased a legacy brick in memory of Chris Cornell at the Rock and Roll Hall of Fame Museum as part of the Legacy Brick Program.

The Rock Hall website states, “Your personal message will be engraved on a brick that will be installed in the plaza in front of the Rock & Roll Hall of Fame and Museum. Each order includes a replica brick that features your personalized inscription and the Hall of Fame logo along with a Certificate of Authenticity. Additional replicas are available for purchase as well as custom engraved display cases. The logo engraved display cases are a great way to showcase your replica in your home or office.

After your brick has been installed, you will receive a locator map so you can easily find yours when visiting the Museum.”

See photos below, followed by an opinion piece about Chris Cornell and Soundgarden being snubbed by the Rock and Roll Hall of Fame. 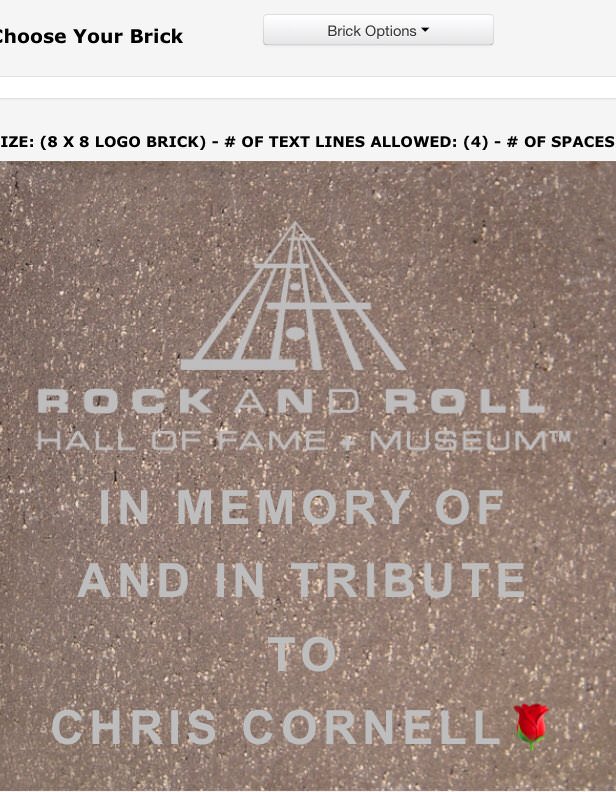 The Rock and Roll Hall of Fame announced their nominees for their 2018 class yesterday, and it included two first time nominee 90’s bands that have stood the test of time in Rage Against The Machine and Radiohead. Soundgarden stood out as one of the biggest snubs. The band have been eligible for a few years now, and they were the first Seattle band to sign to a major label, yet they haven’t even been nominated. With Chris Cornell’s passing this year, it seemed like a given that they would be nominated and inducted, especially with Cornell’s involvement with the Rock Hall in the past, inducting Heart and performing at the ceremony in 2013.

Chris Cornell was such an important artist, he fronted three bands that will be listened to until the end of time in Soundgarden, Temple of the Dog, and Audioslave. There aren’t many singers in the last 30 years with that kind of reputation. Chris’ death has been painful for everyone, it has divided his family, and absolutely crushed his fans and bandmates. Seeing Soundgarden get in the Rock Hall could have been a great opportunity to celebrate Chris’ career and give fans, friends, and family an opportunity to get together and heal. We need some good news right now as we try to recover from such a shocking and painful loss.

While Stone Temple Pilots had a very different career from Soundgarden, they are another band that were snubbed, and deserved at least a nomination in their first year of eligibility. Stone Temple Pilots and their fans have dealt with trials and tribulations throughout the band’s entire career. When Core came out, STP were derided as Pearl Jam and Grunge ripoffs, despite several of Core‘s key tracks being written before Pearl Jam ever formed. To further rub it in, after Pearl Jam’s induction into the Rock and Roll Hall of Fame earlier this year, the Rock Hall put a plaque in Pearl Jam’s museum section stating that they influenced STP.

Scott Weiland’s death just two years ago makes seeing STP get into the Rock Hall something that would mean even more. Due to Weiland’s downward spiral with addiction in his final years destroying his career and his relationships with many in the music industry, his career was not really celebrated when he died as much as other musicians who have passed away in the last couple of years. If Weiland had died five years prior when still fronting STP, he would have received more tributes, but sadly the industry is very cold and they saw less commercial opportunities since his career was at a low point when he passed. The Hall of Fame would be a great chance to remember he and STP’s accomplishments and give them the respect they have so long deserved.

Alice In Chains have been eligible for a couple of years now, and while many think Nirvana were the first Seattle Grunge band to have success on MTV and radio, Alice In Chains released Facelift in 1990, and “Man In The Box” was really the first Grunge radio hit before Nirvana exploded. Layne Staley discussed how much winning a Grammy award would mean to him in interviews in the 1990’s, saying it would make him proud to go on stage and to be able to accept it. Alice In Chains have been nominated for several Grammys, but unfortunately have never won. Layne Staley even made his final public appearance at the 1997 Grammys, and a Rock and Roll Hall of Fame induction for Alice In Chains could give Layne some posthumous vindication. Alice In Chains were one of the most influential bands of the 90’s, there’s even a famous band with many radio hits named after one of their songs. They should undoubtably be in the Rock and Roll Hall of Fame.

There are many other snubs as well like The Smashing Pumpkins, Tool, Jane’s Addiction, and Nine Inch Nails, but their members are all still alive. With Chris, Scott, and Layne dead, it makes something like a Rock and Roll Hall of Fame induction mean that much more, since their legacies are now all we have left of them. It’s time for the Rock and Roll Hall of Fame to show them the respect they deserve.