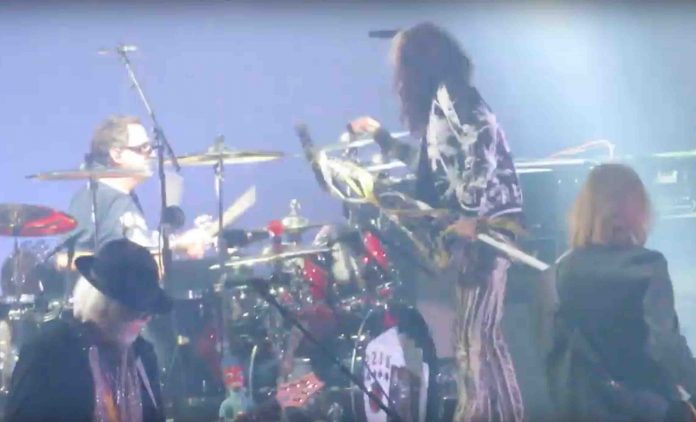 Aerosmith drummer Joey Kramer’s temporary replacement John Douglas was ripped for recent performances in Massachusetts by Aeroforce forum admin tomass. Douglas is filling in for Joey Kramer, who broke his foot. Steven Tyler’s overweight girl was revealed by Howard Stern on his show.

tomass posted, “I really tried to make the best of the night and enjoyed it for what it was but it was just an average show for the guys.. I made the mistake selling my Vegas tix but I have just been burned too many times in the past and didn’t think the risk was worth the investment. Turns out the Vegas shows were off the hook and just another luke warm performance for the hometown crowd.

Agree 100% about Eat The Rich.. You could see it suck the life out of the crowd as I mentioned in my review. I know people around here love it but the song is a throw away as most of that Geffen stuff.

As for the band not being the same without certain members, I have to agree for the most part. It would obviously suck without Joe or Steven…The show I saw without Brad was definitely not the same.”

Steven Tyler revealed an A-list actor who abused heroin. He added, “To be honest, and I feel bad saying it but the band didn’t miss a beat during the show I went to where David Hull filled in for Tom. He fucking killed it. The guy is a beast and has plenty of history with the band. They even busted out a couple deep gems. I think that could still work.

I always thought it could work without Joey. I know I have seen his son fill in for a few songs and it was fine but this show changed things. Either I never gave Joey enough credit or the fill just blows which really could be the case. I know for a fact that he is the reason they dumbed down the setlist and couldn’t call any audibles. That is pretty pathetic on his part.” Steven Tyler revealed the Aerosmith hit he wrote high on drugs recently.