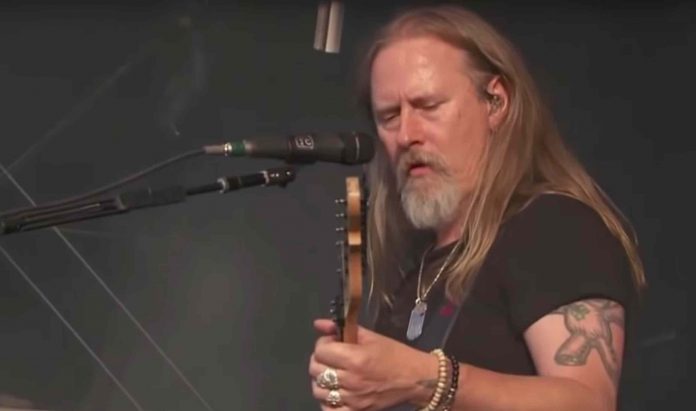 If you’re an Alice In Chains fan, you obviously know about ‘Dirt,’ yes, that’s right – arguably Alice’s best album was ‘Dirt’ and the legacy that has been spawned in the music world from that album is severely underrated. One might think that Alice In Chains were not as mainstream successful as bands such as Pearl Jam or Nirvana in the 1990’s, and they would be right – but while they may not have been on every talk show, they were still the hero that the metal world needed in the Grunge era.

If you aren’t a diehard, hardcore, Alice In Chains fan, (like myself) you may be shocked to know that Tom Araya did a guest spot on the legendary record. Tom was called in to do work on the track ‘Iron Gland’. Given, this track is purely filler and often unfortunately skipped over, but it’s a cool story.

In the book Grunge Is Dead, Jerry Cantrell elaborated on the making of the album and Tom’s involvement:

“Dirt was a heavy record… We came down to L.A., and things had gotten darker around the band. As they will — if you’re f**king around with the wrong shit. And we were. We rented a ranch house out in Malibu, and we rehearsed in it. We were coming up with all this stuff that was just aggro. Super powerful, very heavy lyrical content. It was a serious step up from Facelift — I equate it, as far as artistically, [to] what … Nirvana [did] from [Bleach] to Nevermind.”

Obviously, Alice In Chains were very supportive of Nirvana, but they definitely also wanted their piece of the big pie too.

Jerry continues: “We came down to LA, started tracking the record, and that Rodney King verdict came down… the f**king town went up in flames. We were staying at the Oakwoods in Venice — so we had to come from Studio City to Venice while the whole city’s in a riot. We called up Tom Araya from Slayer, and we went out to the desert and hung out there for a while, ’til the shit cooled down. We had to postpone until the riots f**king chilled out. That’s a moment I’ll never forget — tied to that record.”

The very “Iron Man”-esque track is, according to legend, the product of a riff that Cantrell wrote that the rest of the band abhorred. Apparently they let him include it on Dirt if he promised to never play it again.