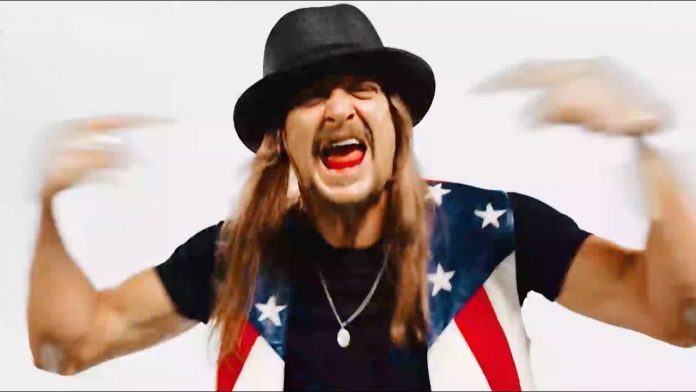 If you ever thought “What would be the most Kid Rock fan thing to do?,” then we may have an answer.

Recently, in Wheeling, Virginia, a woman was arrested after a Kid Rock concert at the Pavilion at Star Lake.

The town’s police said they responded to a fender bender, and multiple people at the concert pointed to a Kia, saying that the car damaged multiple vehicles. Those at the concert said the woman was going in and out of the parking lot, taking down cones, barrels, and flags, but missed hitting police officers, concert workers and medics.

The crowd of people tried to get involved as well as police also said one person at the venue tried to stop the vehicle by running after it and smashing the driver’s side window.

It all came to a head when an officer was able to get to the woman’s vehicle and turn off the car, but the woman allegedly tried to bite the officer and turned the car back on and drove away.

According to police, the woman was able to get out of the parking lot and ended up getting stuck in a ditch on Route 18. This would be the demise of Manasha Bradley for the night as she was arrested.

Police said Bradley was not under the influence and had no alcohol in her system. A loaded gun was found under the driver’s side seat as well.

As it stands at this moment in time, the Kid Rock management team or social media team have not released any statements about this thus far. It’s probably also safe to say that they most likely will not want to touch this topic at all as it does not directly reflect Kid Rock or anyone other than the person in question as well as police.