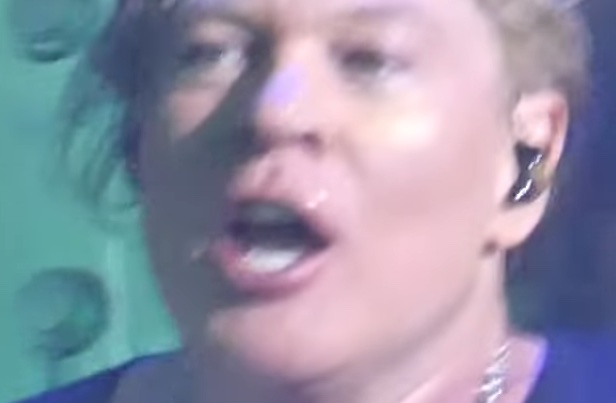 Guns N’ Roses suffered a power outage at a show in Tijuana, Mexico a couple of days ago, and a fan said there were problems with Axl Rose‘s sound when it happened. Axl Rose and Eddie Vedder were horribly disrespected yesterday.

A fan wrote on Facebook, “Here’s explained what happened tonight in Tijuana. At some point, they couldn’t set up Axl Rose’s audio and the band didn’t get out of the stage and’kept playing on stage, with the audience in the background singing ‘knockin on heaven’s door.’ then they have In place everything, after 7/8 minutes.”

Axl Rose did a magic trick while the show temporarily stopped to entertain the audience. TMAC20 posted about the show’s setlist, “Locomotive and Coma should be mainstays. While The Band should be working on new material – they are out working – Slash’s tour was over a little while back – The Band is warming up for a new album – they have warmed up enough – Bring the goods and no fucking retreads from Chinese Denocracy – All new shit – If Not – I cant wait heAr Smkc new record which will get Recorded in a few months and be amazing. As a day 1 fan- Axl put up or shut up.”

Guns N’ Roses guitarist Slash called out a Rock and Roll Hall of Fame snub a few days ago. Tom2112 responded, “Personally I think there’s a very good chance of hearing Locomotive again. I’d guess (and that’s all we do here), that Axl realises that it’s a tricky song to sing and that he’s not quite able to knock it out so… in his own time, away from a live stage with thousands of cameras he’s rehearsing it. If and when he thinks he’s up for it, he’ll give it another go. No reason to be crying that it was off the set again last night! It’s an alternate song, so it could be a good few shows before it turns up again, but maybe next time they tour It’ll be a main list song.

Main point for each of the remaining shows is to just expect the set list that was played at this show, IF they play something different then great, if not! yes it’s a bit boring but there’s no need to be disappointed.” Guns N’ Roses savagely rejecting James Franco was revealed last week.