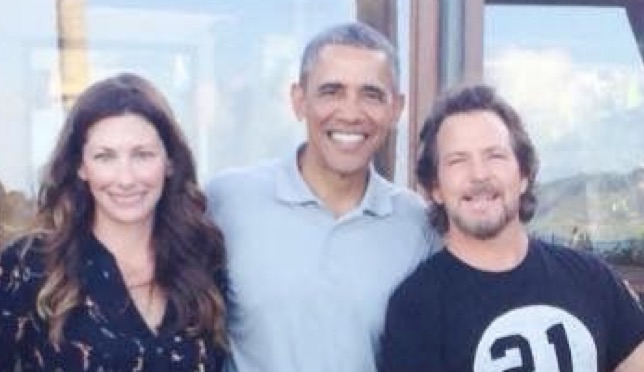 Pearl Jam singer Eddie Vedder has a major fan in former President Barack Obama. Obama is a big enough fan that he even wrote Vedder a letter when Pearl Jam was inducted into the Rock and Roll Hall of Fame in 2017, Alternative Nation has learned.

Obama wrote in a handwritten letter, “Congratulations on Pearl Jam’s induction into the Rock and Roll Hall of Fame. You have shaped American culture for a generation and captured the best of our spirit.

I’m proud of you, my friend. Please share my greetings with the rest of Pearl Jam. Love to the family and see you soon.

Obama and Vedder have been photographed together in Hawaii, Obama’s birthplace and Vedder’s favorite vacation spot for surfing. Vedder and Obama also spent time living in Chicago, with the city holding a special place in their hearts.

Vedder and Obama are in agreement when it comes to their liberal political views, but when it comes to Chicago sports, their views couldn’t be more diametrically opposed. Vedder is a die hard Chicago Cubs fan, while Obama is a loyal supporter of the Chicago White Sox.

Vedder has also performed for Obama in the past, even attending his farewell event to the White House in January 2017. Vedder recently filmed a video with Joe Biden’s wife.