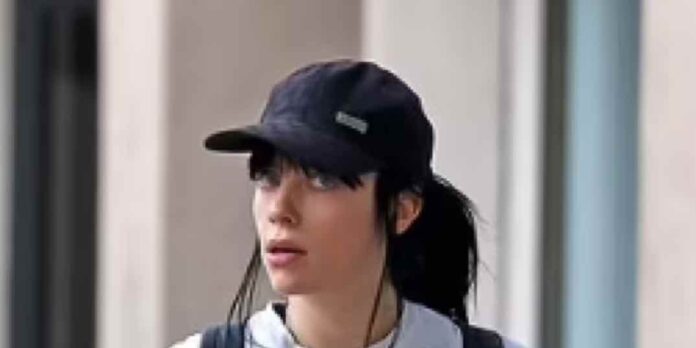 Popular musician Billie Eilish raised some eyebrows on her way into the gym. She was spotted donning a X-rated shirt, featuring a photo of bare chest area on it (censored), in Los Angeles, California on Friday morning.

As she put on a leggy display in a pair of dark brown spandex shorts, the Bad Guy hitmaker, 21, turned heads in her risqué tee, which she paired with white sneakers. For her workout, the seven-time Grammy winner wore her brunette locks pulled back in low ponytail under a black baseball cap.

It was last year that the performer revealed she has made fitness a priority in her life during an an interview with Zane Lowe on Apple Music 1 after recovering from an ankle injury.

”I’ve been completely changing the way that my life is involving fitness — I’m a gym rat now,” she raved.

She continued, ”When did that happen? I don’t know but it did and it started with ”I can’t get injured anymore.” I’m not gonna let myself live like that because I lived like that for years.”

Time in the gym has made her ”feel so much better as a person” and improved how she ”can move on stage.”

”I feel so much better,” she gushed after previously battling body image issues during her teen years.