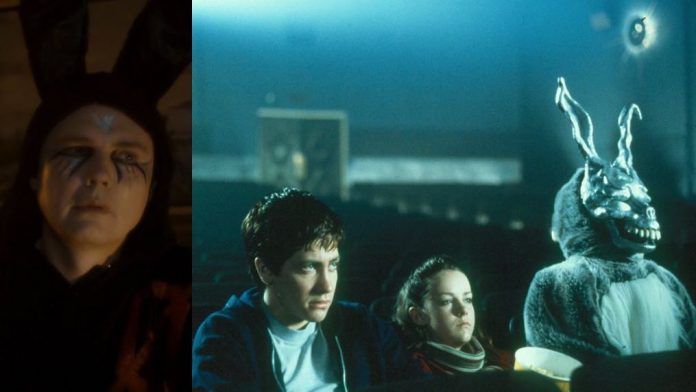 The Smashing Pumpkins recently released the official music video for “Silvery Sometimes (Ghosts)” directed by Billy Corgan. Some fans thought Corgan’s outfit in the video was a reference to the film Donnie Darko, but Corgan told fans in an recent Instagram Q&A that it isn’t, and he dislikes what the film stood for.

The outfit you are wearing is a reference to Donnie Darko as people are speculating?

“Has nothing to do with Donnie Darko. I am not a fan of the movie. Not that it’s a bad movie, but I disliked immensely what it stood for.”

Off subject. What did you not like about Donnie Darko? What do you think it stood for???

“It doesn’t matter. My opinion is no more valuable on that than anyone else’s.”

[The Silvery Sometimes video is] obviously a remake of your fave film Donnie Darko 😉 I’ll take my prize now sir.

“Looking for the block button.”

Corgan has also posted a lengthy explanation behind every shot in the the “Silvery Sometimes (Ghosts)” video after holding an Instagram Q&A where he would award a fan a prize if they could figure out the meaning of the video. Nobody did, so Corgan gave out no prizes.

“The clues for the narrative are placed in the opening, as DJ Jackie Cherry (played by @therealmarkmcgrath) explains the Z109 contest; where each ‘ghost fan’ will receive 25k for the charity of their choice if their SP band member can make it to dawn (meaning survive the terrors of the haunted house, well known for actual hauntings). Which explains why the fans are on stage with us, and appear in the social media selfie that starts the music portion of the video. The @officiallymosh reference is an inside joke, as we asked Mosh to take part in the shoot but she was unavailable (as in she CLAIMED she was in another country! Hmm…) Hence, the sizzling, cardboard cutout. The fans in ‘the crowd’ are actual SP fans who had submitted essays to be in the video, and some had flown in from far away places; so we tried to sneak in as many shots of them as we could, and the gentlemen dressed as BC circa Zeitgeist was from the ‘real crowd’ as we were one short on our casting. The music you hear as Jackie speaks was composed by yours truly on harpsichord. Last note, the band’s demeanor as Jackie introduces us is a lark on all the radio appearances we’ve done through the years, and the occasional goofy stuff they’ve asked us to do. But we mean it warmly, or, to steal from Jackie it’s all a bit of ‘good fun.’ And wait as Mark, I mean Mr. Cherry counts where Mosh was supposed to push us in (‘cause we was scared….)
10, 9, 8**********

After the band takes it’s selfie with Jackie Cherry, we march inside only to be confronted with a grim reality; which is the entire house has been wired with web cams (Z-cam) so that fans around the world can watch the band live. WPC having agreed to this contrivance of management to promote our new LP (Shiny and Oh So Bright, Vol 1!), Jimmy and the gang show their displeasure by heading upstairs to bed (wanting no part in the shenanigans as bands often do). Each member having donned their night-wear (WPC in goth, Zero-inspired bunny suit, the rest in pajamas and classic robes), I am first to realize that not only is the ‘video in the video’ performance cut of ‘Silvery Sometimes ‘ playing on a continuous loop on every television in the house, the TV’s themselves can’t be turned off or turned down (hence my frustration! And again, a management decision for promotion I’m sure. Anything to snare the kids…) James being James pays no attention to this (smartly, instead sneaking a forbidden cookie,), Jeff puts in ear plugs to sleep, whilst Jimmy pets his cat in absentia and watches the performance with particular detachment. No band member on the surface believing this is anything but a silly contest that is at least doing some good for charity. Jeff is the first to be woken by a sound in the hall, and noting nothing to see there, turns back into his room only to find a ventriloquist ‘s dummy (which he can’t see well due to poor vision), but once he takes his glasses off the dummy he figures it’s just a dumb gag and tosses the dummy aside…But then he turns, feeling someone or something is behind him!

So Jeff sees the dummy with blurred vision, notes his glasses on it, puts them on, thinks he’s being pranked, and picks up the doll before tossing it aside. He feels someone or something behind him, and fearfully turns, seeing a monstrous thing so frightening he recoils in fear. The flash of the ‘red skull’ symbolizing Jeff has been eliminated (ostensibly leaving the house and therefore, the contest). This leaves 3: Jimmy, James, and WPC; who is awakened by Jeff’s screams. Going down the winding staircase to investigate, candle in hand, he is confronted by a painting of ‘the ghost girl’ (played here by @edensheaven). Lightning crashes, and in the flash the woman in the painting’s neck is slashed, with blood sent flowing. Red skull! WPC is eliminated. Jimmy is roused from sleep by WPC’s screams, and in his delirium from dreaming to the still playing video, he fails to notice the two spectral figures behind him! Which causes Jimmy to leap from bed, crashing into a bookshelf. Red skull! Jimmy, too, is ‘eliminated ‘. James, a sound sleeper, hears haunted notes from the attic above, which causes him to shuffle down the hall towards a certain doom? Or the answer to the looming mystery?

James, a sound sleeper, is awakened by a cascade of haunting notes. Leading him to the attic where, beneath cobwebs and darkness, a piano with keys stained with blood plays a funeral dirge; unaccompanied by human hands. Blithely he realizes this is nothing more than an automated piano, and switches it off. Which sends him shuffling back to bed. As he comes down the hall he spots unusual activity beneath a door (when all should be in bed), and opens it to investigate. Whereupon he comes upon WPC operating this entire ghost fraud, as my friend’s relax behind me (@edensheaven taking alluring selfies, and @drabmajesty playing chess when all should be trying to get James out!) Busted, I make my case that I was only having a bit off fun instead of admitting what I was really up to (which was drive them out so that I alone would win the contest). James is joined by Jimmy and Jeff, both having figured out that they’d been played, and before all 3 can let me have it, we feel the presence of pure evil. Turning to face the visage of hell itself, the creature unmasks itself to reveal DJ Jackie Cherry, who taunts us that he is the real mastermind behind this foul operation. But then it gets more wicked….”