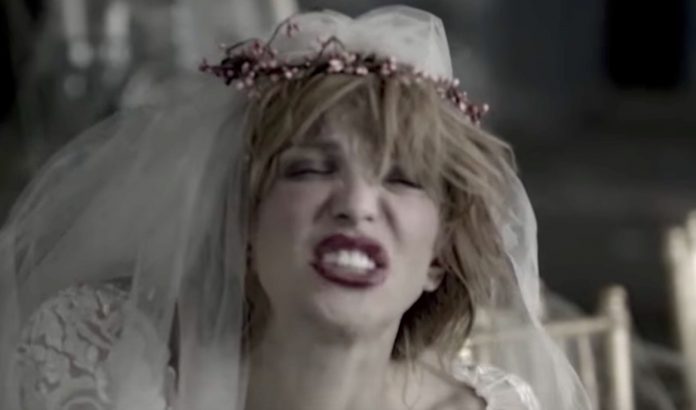 Courtney Love was Faith No More’s lead singer for 6 months in 1984 before being succeeded by Chuck Mosley, and later Mike Patton. On Saturday night at the Basilica Hudson in New York at an event celebrating her career, she not only reunited onstage with former Hole bandmate Melissa auf der Maur, but also with her ex-Faith No More bandmate Roddy Bottum. Love, auf der Maur, and Bottum performed a stripped down version of Hole’s 1994 classic “Softer, Softest” with Bottum playing piano, Love on lead vocals, and auf der Maur on backing vocals.

Bottum told Reflex in 1992 (via Faith No More Followers), “She was around for six months or so–quite a while, considering that we were switching around singers a whole lot at that point. [The music] was kinda along the lines of what we did on the first record. We would just play riffs over and over again– we thought we were *so* inventive, [laughs] because we thought it was so driving and so heavy. But she was really good. She did a lot of screaming stuff, and we had a lot of slow melody stuff too. When she sang with us, she was punk rock; now she says she’s always been punk rock, which is not true at all. After she left our band she was totally into–I mean, with a sense of humor, but really hardcore pop sorta stuff. We all were at that point–we used to do a cover of Van Halen’s ‘Jump.'”

Billy Gould said in the The Real Story in 1994, “It got to this point where things were just too much. Courtney’s not the sort of person you could jut be an equal with in bands, she’s got to lead and tell people what’s what. She was the dictator, and in our band things were democratic.”

Bottum told The Washington Times in 2015, “I think our musical voice is way more sort of male-driven. We’re way more of a dude band. Courtney is awesome and she’s powerful, but I think having a male singer was the route we needed to go.”