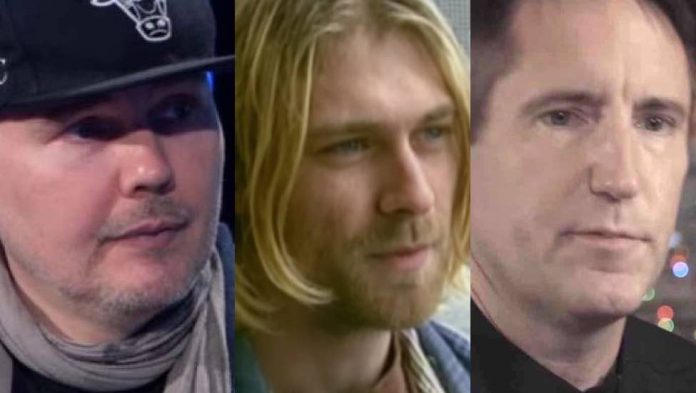 Maybejust.happy has shared a fan story about Nirvana and Smashing Pumpkins from February 19, 1992 in Tokyo, Japan. You can read it below:

I was stationed in Tokyo in the 1990’s. I remember buying Nevermind at the BX and being blown away by it. When I saw they were coming to Tokyo I managed to get tickets. A buddy and I rode the train into Central Tokyo and got in line for the show. There were many English speaking people in line along with a slew of Japanese of course.

And here’s where it gets mildly interesting. As we were talking to the people in front of us a couple of people came up to my friend and I and asked us if we were the contest winners. Without missing a beat (and quite atypical of my personality) we both looked at them and emphatically said, “YES! We are…”

They said, “Come with us, you don’t have to wait in line. Here are your backstage passes. We’ll show you to your seats.” The girl in front of us just stared at us with her jaw hanging down and didn’t say a word as we left the line and headed past everyone into the show. She was totally aware that we were not the contest winners as we had been talking to her about how bad our seats were just before they came up to us. Thanks Canadian girl for not cock-blocking us!

We got into the venue (my first Tokyo concert) and what shocked me immediately was that it was so quiet. The hall was 75% full and you could have had a normal conversation without any effort. In fact as we crossed the threshold my friend and I both started whooping and shouting out in excitement which startled our handlers and made them look back at us in mild amusement at these crazy gaijing making all that noise. You could feel the eyes on us as we sheepishly settled down into our seats.

We made it through the show (FUCKING AMAZING SET) without anyone coming to take away our amazing seats and haul us out of there. I didn’t stop looking over my should for security until near the last song.

At the end of the show we headed over to the side of the stage half expecting to be denied and the huge sumo wrestler looking security just opened the gate and welcomed us through. Once inside another handler took us back to the dressing room and in through a small door and bam, there they were; Novoselic, Cobain and Grohl.

Kurt was in the middle of a large group of giggling Japanese girls, Krist was standing off to the side with an American girl and Dave was on the other side of the room tearing off his clothes saying, “girls, where are the girls. We need to get out of here and find some girls…” This made my buddy and me laugh and we wished him luck as he literally tore out of the room half dressed shouting at his bandmates to come on.

Krist then asked us where we were from and we told him that we were American Military stationed there and he was really nice. The girl he was with was incredibly jealous of him being nice to us and her body language and harumphing was really lame but it didn’t detract from him having a nice conversation with us wherein I asked him why they did not play “Something in the Way”. He indicated that it was hard to do live with the cello and all. Great guy who spent a nice few minutes in genuine chat.

At some point I managed to get a small window of opportunity to have a minute with Kurt and we took the picture. I expressed my sadness that they did not play “Something in the Way” to him and he seemed pleased that I liked that song and was sorry they could not play it.

My buddy, in seeing that I was finally chatting with Kurt came up to us both and said, “We’re in the Air Force, but it’s cool…We still do drugs” And I just looked at him like, “Are you fucking serious?!?!?” (Haven’t done drugs my entire career and neither had he) I don’t know what his problem was and why he said that to this day. We never spoke of his temporary insanity and I chalk it up to being star-struck.

Needless to say it ended the conversation much to my chagrin. At any rate it was at exactly that moment that “The Smashing Pumpkins” walked in to the dressing room minus D’arcy.

As were standing next to Kurt they immediately came right up to us and quite oddly made fun of my Nine Inch Nails shirt. They were pompous and indignant the entire time. We asked for pictures and were granted the moment but Billy said, “I’m gonna make my rock star pose” in a snide way and was generally an ass to us.

I was really bummed at the way they treated us as I really, really liked their music at that point. Right after that they all bailed. As they were all walking out Krist said to me, “Take some of this stuff with you, we don’t want any of it/aren’t taking it. He pointed to a long buffet table filled with gifts and food.

We each took a shopping bag of things from that table. I still have a small sake cup with gold inlay from that night to this day.

And that is how I met Nirvana.