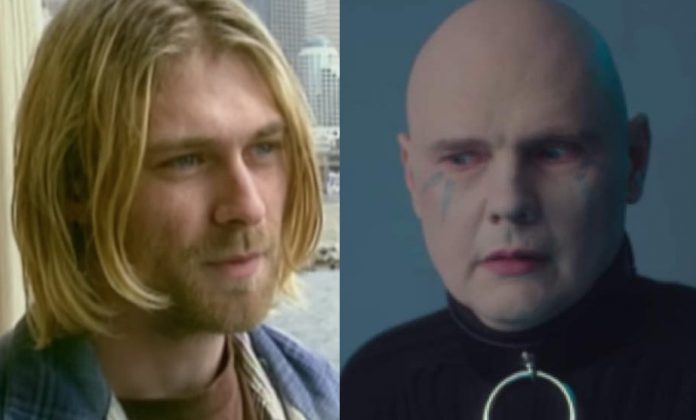 Corgan told Q, “OK, let’s take a quick jump in say Kurt and Eddie, both incredibly talented people and at a very young age. Probably before they knew who they really were, they’re assigned a certain role in the world.

They are smart people, they figure out the role they’re assigned, and they either fight it or they go along with it, but it’s not really in line who they are as people 24 hours a day. It’s a lot of press narrative, or it’s pushed by a record company because it’s good for record sales, and that’s a world that’s crumbling, and it’s crumbling quite quickly.

That’s the shame of it, particularly for Generation X, particularly a generation that was the first generation to enter into the internet age, with AOL chat rooms in ’95 and stuff like that. We didn’t know what we were walking into. We walked into the buzzsaws of expectation, you know, I used to call it the ‘unchecked ID.’

People’s inner thoughts run amok – when all you are was some kid in a basement with a dream and you just went, ‘Gee, I hope I can play Saturday Night Live one day,’ or something like that. It gets a lot more complicated, and what I’m trying to say in so many words is – it gets complicated for reasons that are beyond you.

If you really think about it, the things that beguiled Generation X, Kurt, Eddie, myself, Courtney [Love], whoever from our generation, really didn’t have anything to do with us. It was somebody else’s narrative, it was some other generation’s narrative of what success was or accomplishment was. And what’s funny – it’s all fallen away, and what is remaining? The music. That’s the funny part; the same reason that people engage in the first place is the reason that people are still listening, it’s just the music.”