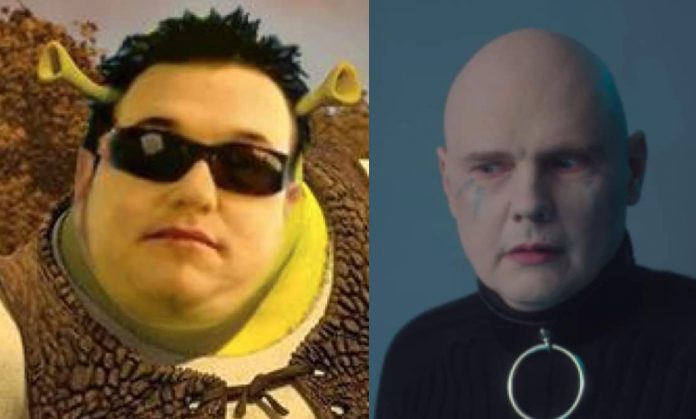 Q: Imagine Dragons is considered the most popular rock band right now. Have you listened to their music?

Corgan: “I don’t comment on any artist. There’s no way to say anything about anybody. And I’m going to play victim for five seconds: I didn’t create this culture. I contributed to it, but this is somebody else’s Frankenstein, and they can live in it. I don’t participate. You can all argue about who’s great and who’s not great. I’ve said so many complimentary things about artists through the years that never gets quoted.

I got in this stupid thing this year with Smash Mouth because I mentioned on Instagram that at one point, we were up for the first “Shrek” movie (soundtrack) and then DreamWorks replaced (us) with Smash Mouth. Which was fine, that’s Hollywood. Somehow the Smash Mouth guys got all bent out of shape, and I was in a meme war with guys I used to hang out with who had heard the story from me personally 15 years ago. It turned into this thing where I’m a bad guy because I brought up a historical fact.

This culture is so beyond me in its level of stupidity. It weaponizes something as stupid as a historical fact into a gossipy, TMZ moment – which by the way, doesn’t sell anything other than clicks. It doesn’t sell records; it doesn’t sell concert tickets. It’s totally to the detriment of the artists that are participating and to the benefit of other forces that don’t care about music. I only brought up the Smash Mouth thing because it’s out there. I don’t want to create a new (feud).”

In August we reported that in an Instagram story Q&A, Smashing Pumpkins frontman Billy Corgan claimed that the Pumpkins were offered to record the lead single for the 2001 film Shrek before they split up.

The song they wrote was “Untitled” and they ended up recording it in 2000 before their split up, despite it not ending up in the film. The offer was withdrawn and then given to Smash Mouth, who recorded a version of the Monkees’ “I’m A Believer.” “All Star” was also featured in the film.

Smash Mouth responded on Twitter, “Actually we said no and Michael Austin from Dreamworks kept calling. That went on for over a month. We assume multiple bands we’re asked. If it feeds Billy’s ego to think they we’re first let him think that. Def would have been a darker approach. @THE_EELS are on it & others.”

Billy Corgan has now posted about Smash Mouth’s critical comments directed towards him.

Did you see what Smash Mouth had to say about you?

“Don’t care, won’t care. Facts are facts. And the fact that we were pushed aside for what became a big hit for them is hardly a diss on the other side. And I told the band this story 16 years ago.”

I’m starting to feel guilty about throwing fuel on the Shrek fire with my ‘which song’ question!