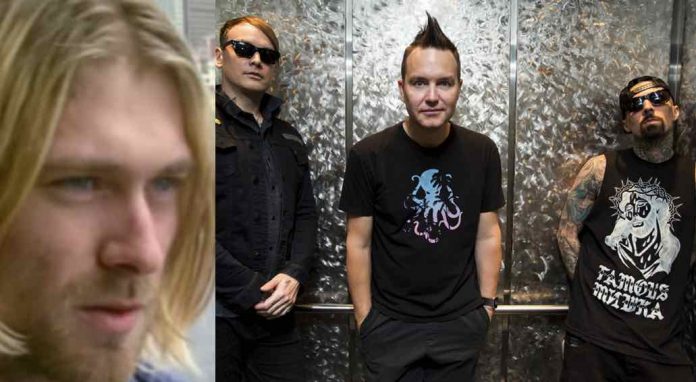 “The first time I heard ‘Smells Like Teen Spirit,” I remember where I was – I was in high school, in my buddy’s car. It was exciting for music, I’m sure – punk-rock became a thing again, a huge thing. Not even again, for the first time like that. Even the Pistols and early punk-rock stuff – it wasn’t huge, it wasn’t being sold in Target or Walmart or whatever.

“‘Smells Like Teen Spirit’ was their only hit for a long time, for anyone who was around for that. And they, rightfully so, played the shit out of that song.

“That’s a great song that I can’t really listen to anymore. It’s not like I would turn it off, but I don’t listen to ‘Nevermind’ because it’s just been shoved down my throat. I love Nirvana, I love that record, it’s just played too much.

“I love David Grohl, he’s a great, fun guy, as you guys probably know, and that record’s amazing. I was a fan of [Nirvana’s 1989 debut album] ‘Bleach,’ I saw Nirvana a couple of times and that man, Kurt Cobain, could write a tune, for sure.

“I don’t want that to get lumped into the list of things that were ruined, it’s just – ‘Smells Like Teen Spirit’ is just a song… once you hear it, it’s like saying the word ‘door’: ‘door’ is a cool word, but if you say it enough times, it starts to sound weird.”