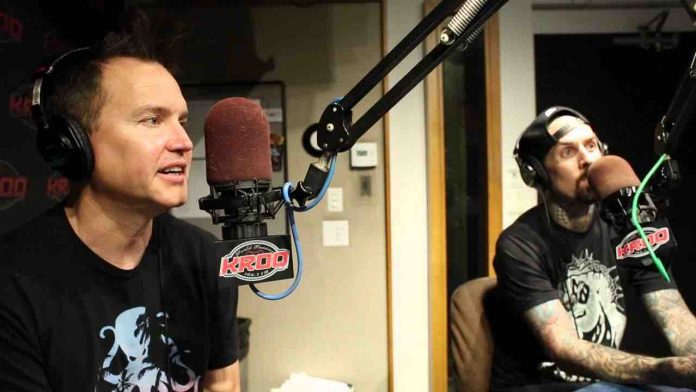 Travis Barker has quite literally taken over the music industry. It’s such a twist to see the former drummer of Blink-182 totally pumping out star after star. It seems like Travis Barker is quickly becoming the new Rick Rubin it seems when it comes to just how many hits can be pumped out of his brain. With Travis working with stars such as Machine Gun Kelly, we knew there would have to be another big surprise and what a surprise it was.

Travis Barker rang in the new year with big things in mind. He knew that in order to become the biggest person in the industry he would have to do the unthinkable. Travis Barker brought back Avril Lavigne. Now, you may think to yourself “why was Avril gone for so long?“, But now the queen is back and ready to take her throne with the help of Travis Barker.

Travis Barker isn’t the only Blink-182 member to be joining Avril Lavigne on her journey to being even more successful than she was years ago. Enter Mark Hoppus, the bassist and singer of Blink-182 who was on After School Radio on Apple Music Hits with Lavigne.

The two discussed her upcoming album Luv Sux, working together on the project, the 20th anniversary of her debut album ‘Let Go’ and signing to Travis Barker’s label.

Below, Avril Lavigne really opened up about what all this means to her and just how important music has always been to her. It seems that Travis barker came at the right time for Avril Lavigne. By the way, it’s so full circle to see just how Blink-182 members and Avril Lavigne came together once again to take over the airwaves.

Here’s what the princess of punk had to say on After School Radio on Apple Music: “I’m so excited. The whole energy around it, it was so fun to make it, to get in the studio with Feldy and Mod, Travis, and even you. It was just such a good time. The album’s got a pop punk vibe all the way through and I feel like this is a type of album I’ve wanted to make for a long time. My last album was very introspective and deep and this one is just rocking all the way through. And I’m really excited to take this out and play these songs live… I feel this is my most alternative record sonically.”

Avril: “There was a period where it was, on my first album, it was like, “Okay, I want to rock out. I want guitars. I want to sound like a band. I want drums.” At the time, it was bubble gum music. Super pop music was in so I to had fight for that. But then a few albums in, people were like, “Radio just don’t play songs with guitars and live drums.” I had to evolve, but things had to dial back a bit. Not that I wanted to do that, but I did.”

Avril: “And so, with this album, I just wanted to not hold back at all and just guitars, drums, just go for it. And so I feel like I’ve always wanted to make this record. And then lyrically, it’s funny because, I mean, the album is called Love Sux and I went into this record feeling that way, genuinely. I still do. I still do, but, I mean, it was a time for me to reflect on my past relationships and my past experiences in love and the ups and downs I’ve been through. And I still experience that, and so I think in the pandemic, especially with having so much time to do songwriting, it gave me an opportunity to really go there and it felt good to go there.”