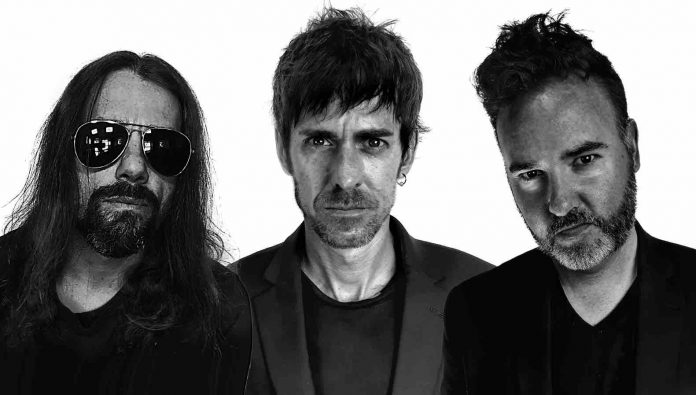 I love when a band comes across my emails and sends in a full length record for me to listen to throughout the day. It’s even better when the album sounds like it was made just for you.

Meet, boWsER. They are hailing from the Gold Coast, Australia. The trio have announced the imminent release of sophomore album “Whispers From the Wicker Man”, due March 12 .

They state that “This relentless new collection further explores the band’s unique brand of ‘rock with an apocalyptic intelligence, hitting as hard as city concrete’ and drawing comparisons to such Goliath’s as QOTSA and Them Crooked Vultures along the way.”

Tasty description. Without further delay, let’s take a dive into this record.

boWsER’s record starts strong. The guitar leads you in picking at your ears as a huge fuzzy bass starts to rip apart the speakers. I love the production work here and how the fuzz sounds like velcro pulling apart. I am a huge fan already. The vocals are great here too. The first song we are delighted by is named ‘Renegade’.

Moving to the next song we have ‘Caught The Raisin’. I’m already in for the name. We have a hot and ready riff delivered to us with extra fuzz on top. They certainly can write great riffs. I like this track just as much as the first. The riff here with all the fuzz is great, I really can’t stop talking about the riffs this band makes. Another solid song.

Third time’s a charm. Track three ‘People In The TV’. All of the songs have been great thus far, but this is the hit. I don’t need to go any further than that. Bang. Dead on. Hit.

Track four to six we are hearing ‘Supersonic’, ‘Chemicals’, and ‘Animals’ these ones are really solid radio players. I could see all of this being in radio rotation. The drumming on these stick out really well. Love the work here.

Track seven is ‘Killed A Roman’ and the jazzy style of the guitar work sticks out here. This seems to have the most dynamic guitar work so far. The guitarist is from another world.

Track eight ‘Wicker Man’ has some really good vocal effects. I like any form of effects when used well and boWsER does effects extremely well. Solid track again.

‘Count Static’ and ‘All About The Money’ just about finish out this record and the guitar is going wild on both of these tracks. The album has really been solid the whole way through and hasn’t lost me at any point.

‘Fault Lines’ is the last track and is a great album ender. Usually, band’s will have a slower song to finish out a record, but boWsER keeps the speed up the entire album which is really impressive. Great ending here.

Overall, boWsER really knows how to make songs that stick to your brain and songs that could fit on any rock station. I’m really happy with this record and can’t wait for what’s next. Make sure to get this record in your rotation and do what you can to support boWsER and any band you see us post about here.