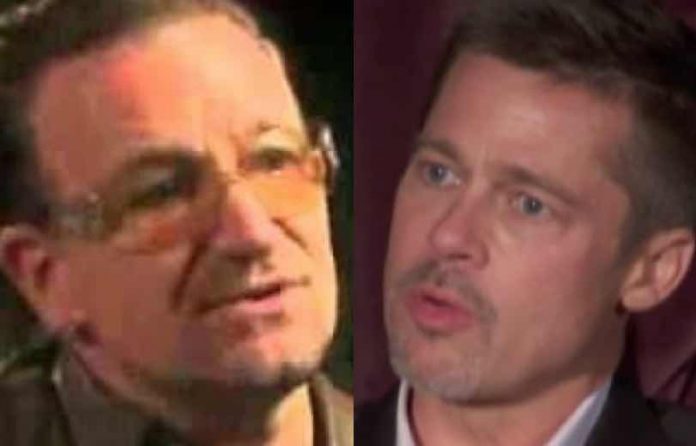 Bono and U2 are known to have fellow A-listers pop up at their shows from time to time during their shows and such was the case during the group’s most recent show in Japan. Here, courtesy of U2 superfan Spycat via Twitter you can see A-list actor Brad Pitt bobbin’ and dancin’ to the music. Bono was recently caught ‘breaking the law’ at this U2 concert.

Although in the photos it can be debated he does look fairly miserable – that could just be from the traveling and the jet lag or due to being upset that this epic performance being over! You can check out Brad’s U2 and Bono escapades below!

A Bono bodyguard recently rejected this U2 fan offer at a bar. In other news regarding Bono and U2 fans recently discussed their thoughts on U2’s Songs of Innocence via the group’s subreddit. One fan stated: “It’s made be reassess the strength of these last two albums. The songs stand up really well in these live recordings, especially Songs of Experience. U2 still hasn’t lost their songwriting skills and I believe these songs will continue to grow on me with time.

The fan continued: “It’s stirred up my latent feelings of bitterness that U2 basically ignored most of the world for years when they toured these two albums, and just concentrated on touring North America and Europe over and over again. I had thought that the Joshua Tree 2019 tour had suppressed my anger about that, but hearing these CDs really makes me again feel disappointed at missing the chance to see most of these newer songs performed live, and in an arena rather than stadiums.” U2 singer Bono was recently threatened by police at party.

He sure is having a good time and really enjoying the concert. #BradPitt https://t.co/W7gb0aqDgq pic.twitter.com/gkNQTIES2N