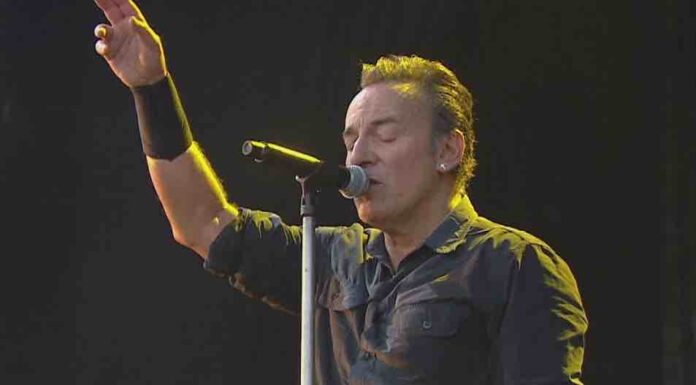 Bruce Springsteen was asked by Howard Stern about retiring in a new interview this week.

“I can’t imagine it. I mean, if I got to a point where I was incapacitated or something. … But up until then … I mean, look at Johnny Cash. Pete Seeger: I played with Pete Seeger in Washington, at Obama’s inauguration. Pete was 91 or 92, and he came out and sang ‘This Land Is Your Land.’ So I look at those guys … I don’t know if I’ll be doing three-hour shows (when I’m older). But I have so many different kinds of music that I can play and do. The Broadway show, I can do the rest of my life, in one form or another, if I wanted to.”

He also discussed auditioning for Columbia Records executive John Hammond, “On the way up, in the elevator, I said, ‘OK, Mike Appel, my manager, has somehow talked his way into John Hammond’s office.’

Now, I know who John Hammond is. Signed Dylan … Billie Holiday. I mean, this guy signed everybody. So I know where I’m going and I know who I’m going to see. And I’m telling myself, ‘OK, well, the worst that could happen is I come out exactly as I am, right now. That’s not so bad. I make a livin’. I play music. I enjoy my life.

“So really,’ I said, ‘I’ve got nothing to lose. The worst I’m going to be is exactly like I am.’ And I almost convinced myself that that was true (laughs) … until I sat down and looked across … it was a tiny little room … looked across a little desk, and there was John Hammond.

Gray suit, gray flattop (haircut), tie, shirt, feet up on the desk, resting back. … Mike Appel, my manager at the time, said a bunch of stuff like, ‘Oh, we’re just in here to see if you’ve got any… ‘ … I mean, he … went insane. And Hammond was ready to kill us or throw us out. And finally he said, ‘Look, just play me something.’ And I just went … (Springsteen sings and plays some of “It’s Hard to Be a Saint in the City”) … and he said, ‘You gotta be on Columbia Records.’ ”