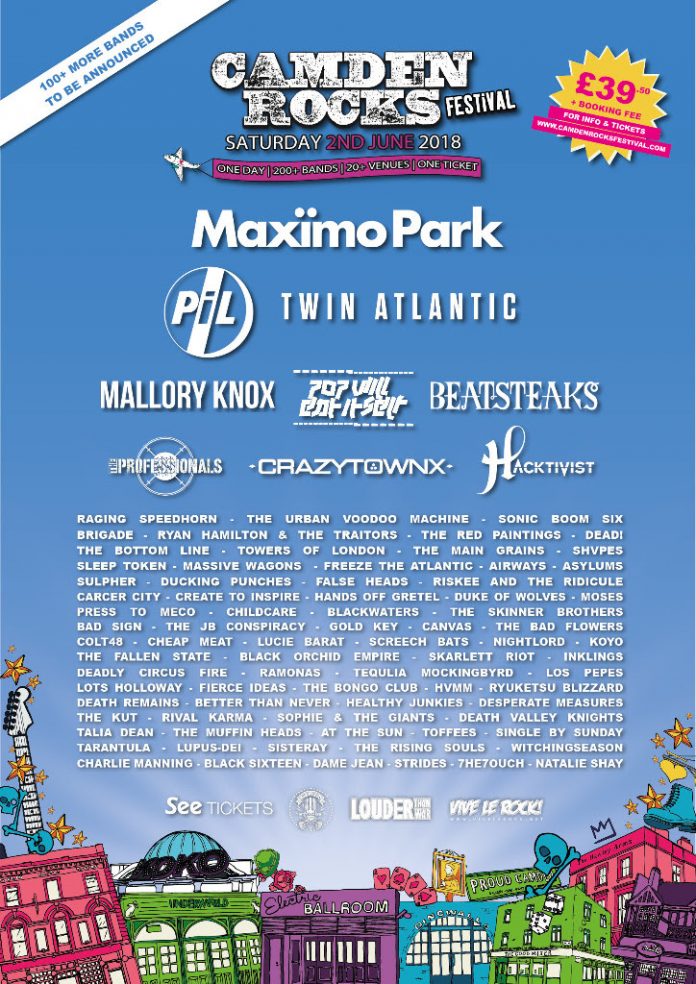 June is just around the corner and that means if you are in London, England you need to head down to Camden Town- the spiritual music area of London for this year’s edition of Camden Rocks.

The festival which is set in various music venues throughout the day and featuring over 200 bands looks like it will be its best yet. The legendary John Lydon aka Johnny Rotten ex Sex Pistols singer will be headlining the festival with his iconic 80’s band PiL. Lydon’s band who formed shortly after the demise of the Pistols have an array of their own hit songs, most famously their 1986 classic ‘Rise’ and the venue will be packed for the return of the band. Also co-headlining will be Newcastle band Maximo Park who will be promoting their new album ‘Risk to Exist’. The foursome alternative rockers will be celebrating 18 years together and this is a gig not to be missed. Also on the coveted line up will be Twins Atlantic, hailing from Scotland and with over 10 years of material to their name their show is set to feature a lot of material from their album Great Divide which was hailed as a classic when released in 2015.

Sikth may have been formed as far back as 1999 but they have been touring frequently lately and always bring with them a superb show not to be missed and full of energy. Mikee Goodman and Joe Rosser both sharing vocals have an amazing chemistry between them. British Sea Power will also be making an appearance and the bands live shows have always been hailed as something very unique. Other bands set to perform are Mallory Knox who are no strangers to UK audiences and a few years back played at Download Festival. Iconic band Pop Will Eat Itself are always sure to bring a fun atmosphere to any live setting. 90’s indie rockers Echobelly will be churning out the hits and The Professionals will be back for their 2nd Camden Rocks Festival appearance. The band like Lydon’s PiL came about from the end of The Sex Pistols and feature original Pistols drummer Paul Cook on drums. Could we get a small Pistols like reunion at Camden Rocks?

Together with more established bands the festival is a big supporter of bands who are virtually unknown and trying to get out there and be known. That’s why its very possible to hang out with some bands after their gig, and perhaps in a few years time claim to have seen one of these bands in a pub in Camden in front of a hundred people after they have made a huge success of themselves. It really is worth your time to look up these bands and plan your day ahead of schedule as you will be knocked over at the talent on show.

Camden Rocks Festival will feature over 200 bands playing in 20 venues everything from the legendary Electric Ballroom where Prince once played to a local bar on the high street. If you’re in London and like your music loud this is the place to be on June 2nd. Tickets are just £39 and you can purchase these at the link below.