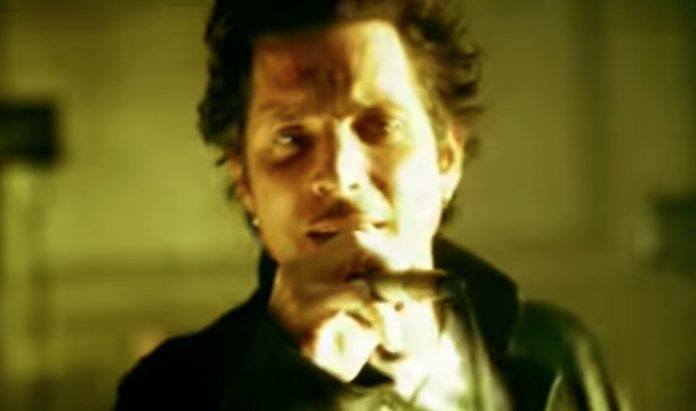 “When we spoke after the show, I noticed he was slurring his words,” Vicky Cornell said in May 2017 about her final phone call with her late husband. “He was different.” Vicky believes that the prescription drug Ativan played a role in his death.

Diaz said on his show, “These people’s minds, why would somebody like Chris Cornell do a show, go to his fucking room and hang himself? I just don’t understand it. I understand CTE, I understand all these things but again, Joey, you haven’t been there and you don’t know what depression is.” He added that he did experience depression in the past, and he also mentioned how prescription drugs can change someone’s mindset, and how you are not supposed to quit them cold turkey. The prescription drug effect goes in line with what Vicky Cornell has been saying.

Diaz then detailed what Vicky Cornell said about the call, “Listen, Chris Cornell did a fucking show, got off the fucking stage, called his wife, she felt his voice was a little [off], his tone, he was slurring his words. She called the security guard to check on him, and he had hung himself. So what was Chris Cornell’s [final] ten minutes like? He just got off the phone with his wife. What do you tell your wife when you have kids?”

Diaz then contemplated the type of call someone would make when about to do something like that, especially after the loss of Chris Cornell and Brody Stevens, though obviously not specifically referring to what Cornell told his wife Vicky, as she has described his statements as not being happy with his in ears at his final Soundgarden show, and fearing he’d blown his voice out, so his statements are a hypothetical.

Diaz wondered if someone like a comedian or musician might say something like, “‘Hey honey, I love you, I just finished the show, it was great, I’m gonna go upstairs, maybe get a late night bite to eat, and I call you in the morning when I wake up. Don’t forget to tell [my child] to have a good day at school and [my other child] I love him.’ OK, you say those things, and now in-between that phone call and going up to his hotel room, where did his brain snap and tell him to get [something] and hang himself? Where? That’s the question that I have.”

In a May 2017 TMZ piece Vicky said (via Billboard) just before she spoke with Chris, 52, for the final time, the lights in the family’s home flicked on and off. Knowing that Cornell was able to control them remotely from his phone she asked if he had just manipulated them and he denied it, saying he’d done so an hour before. That caused suspicion, since Cornell and Soundgarden had been on stage at the Fox Theater at the time. She then says he began slurring his words, with the slurring getting worse as they continued talking, and he complained about the gig and the band’s crew.

“They f—ed up again,” he reportedly said. “They had 3 days to fix my in-ears and I was getting static. I couldn’t hear.” Cornell also complained repeatedly that he’d blown out his voice during the show, then “changed the subject to something that made no sense.” Vicky sensed something was “seriously wrong” with Chris and she said, “I need to know what you took tonight. You don’t sound right, sweetheart.”

Cornell told her he was “really angry and I just took 2 Ativan. I’m really pissed and I had to calm myself down,” referring to a common anti-anxiety medication that can cause sleepiness when taken at higher doses. “I need to know what you took. It doesn’t sound like 2 Ativan. It sounds like you took something else. You need to tell me now what you took. I forgive you,” Vicky told him.

At that point, Vicky reportedly said her husband’s demeanor changed, and his tone got “cocky and aggressive,” not toward her, but in a way that made her recall a time 14 years earlier, near the beginning of their relationship, when the singer was abusing the prescription pain medication Oxycontin so badly that he almost died.

When Cornell changed the subject and “made no sense at all,” Vicky panicked and called her husband’s bodyguard, Martin Kirsten, “begging him to race over to his room and get inside, and she said if he had to knock the door down then so be it.”