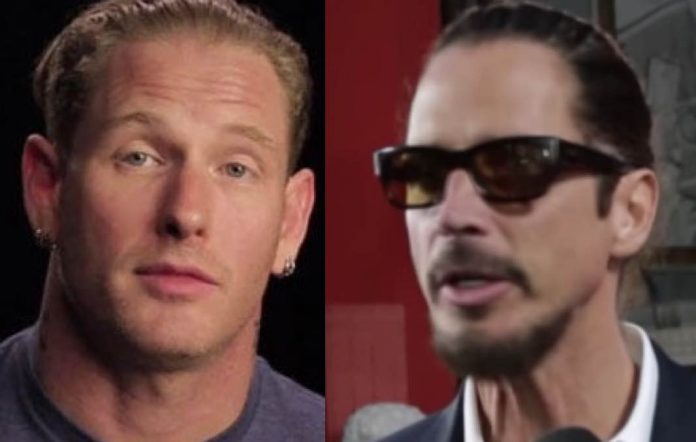 In a new Instagram photo album, Slipknot frontman visited the statue of late Soundgarden frontman Chris Cornell at the MoPOP in Seattle. He wrote, “Seattle
#family.”

Corey Taylor and Chris Jericho discussed Chris Cornell in 2017 on Talk is Jericho.

Chris Jericho: You had a great little tribute, kind of broke down at the end, were you friends with Chris? Did you know him?

Corey Taylor: I met him. I mean we weren’t friends, but we were acquaintances.

Chris: See him around at festivals, and stuff.

Corey: He was such a fucking nice guy, like just a sweet guy, just a shy guy, soft spoken, an amazing singer. I feel fucking horrible about this, it wasn’t until he passed that I realized what a big impact he had had on me as a songwriter. He wrote whatever the fuck he wanted man. I mean whether it was the heavy shit from Soundgarden, from Badmotorfinger, like “Slaves and Bulldozers,” or the really amazingly beautiful shit from the Singles soundtrack, like “Seasons,” which is such a gorgeous song.

Chris: Or the dancey stuff he had on his solo record [Scream] he got shit for.

Corey: Yeah, you know what, fuck you, he did that because he wanted to. I didn’t realize what an influence that was on me until I really put it in perspective, and I was like holy shit, he was the dude I looked up to, because he didn’t give a fuck man. He wrote what he wanted to fucking write. I never got to tell him that, and that is going to be a regret for me for a long fucking time. It’s a god damn shame.

Creed frontman Scott Stapp revealed last week what killed Chris Cornell. Taylor said at a concert in 2017, “”One of the worst things that ever happened was losing people like Chester [Bennington]. He was a good friend of mine, and I was as stunned as you guys were. Because I knew how sweet he was and how open he was and how fucking amazing he was as a person. And the fact that he fought and fought and fought until he couldn’t fight anymore broke my heart. So for him, and for people like Chris, who I looked up to, and for friends of mine who I know have taken their own life, I am taking that and I am turning it around and saying not one fucking more!” A Foo Fighters member making a Chris Cornell tribute show snub remark to a Grunge icon was revealed last week.