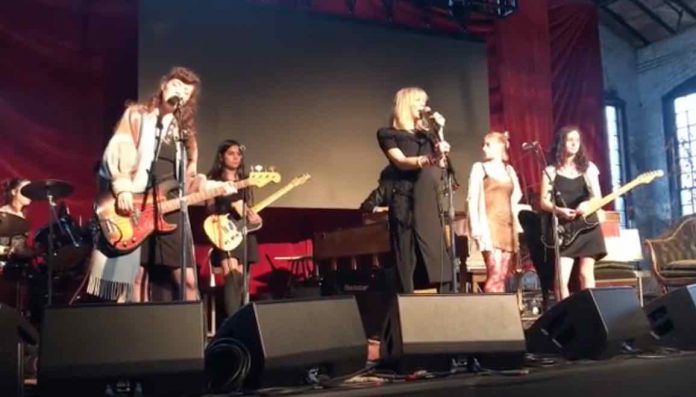 Courtney Love reunited with her former Hole bandmate Melissa auf der Maur at the Basilica Hudson in New York on Saturday at an event honor Love’s career. Frances Bean Cobain was in attendance, and Michael Stipe made an appearance via video since he was too sick to attend the event.

You can watch video of “Miss World” and “Doll Parts” below.

Melissa auf der Maur recently told Stereogum, “I’ve never been one for reunions and I’ve never jumped at that opportunity when Hole have brought it up or there have been invitations to do so. But I had a revelation, really simple. It’s the 20th anniversary of when I left Hole, when we put out our last record. Next year is the 25th anniversary of Live Through This. We have, until now, not done reunions.

Honestly, the event that we’re honoring Courtney with, Pioneering People, we did it once with John Waters, once with Rufus Wainwright. Earlier this year I realized it’s gotta be a woman. So it occurred to me, well, Courtney’s a pioneer. And Courtney deserves a creative bouquet of honoring. She’s one of the most misunderstood, wild card, strange individuals, and Hole’s legacy is important to me, as far as it being looked at with the respect it deserves and the impact it made. The impact is very real. The #MeToo moments, Courtney was always saying this stuff. They just wrote her off as a crazy bitch. That’s not OK. In the ’90s, there was much less of an understanding of how complicated people are complicated for a reason and they deserve a lot more compassion. I watched her be burned at the stake. How many people get accused of murdering their husband when they’re left with their daughter? It’s just unacceptable. I’ve always defended her in terms of any of that negative stuff.

Meanwhile, I reconnected with the group when Patty Schemel put out her documentary. It’s so amazing. That whole story is really incredible. Patty in her own right is a massive pioneer and survivor. When the documentary came out, [I remembered] the power of the live performances of Hole around Live Through This. They were so rocky and painful and intense for Courtney and Frances [Bean Cobain], and for Hole having lost Kristen [Pfaff]. It was such an incredibly visceral and beautiful and tragic time. Seeing that footage a few years ago just really … there’s no one as punk and fearless as Courtney as I know. The power of her live onstage is a massive force to be reckoned with. It cannot be erased with confused or sexist or fearful or judgmental or harsh critics. This woman gave her all to those three albums and to her role in weird-ass pop culture. It’s very heavy, very real.

I’m really excited to honor it, and it’s really exciting for me to have a platform like Basilica to do what we do: very creative, not just a concert, not just a conversation. It’s going to be unique and eclectic, and it’s essentially a gift for Courtney and anyone who likes Courtney or maybe those who forgot what some of her highlights were and how powerful her words were and how powerful her impact has been. It’s very in line with Basilica, in the way we’re going to represent it but in reflecting a sometimes controversial, of course, person. A lot of trailblazers are. To have her there, and to rally around that legacy, for me, is very healing and full-circle and it feels like I’m finally connecting all the dots and I can move on to the next 10 years.”

A love letter to @courtneylove ???. Thank you to everyone that joined us for last night’s sold out Pioneering People Basilica Benefit honoring this artist, feminist, pioneering. Photos to come, sneak peek here performing with @rockacademyofficial and @xmadmx