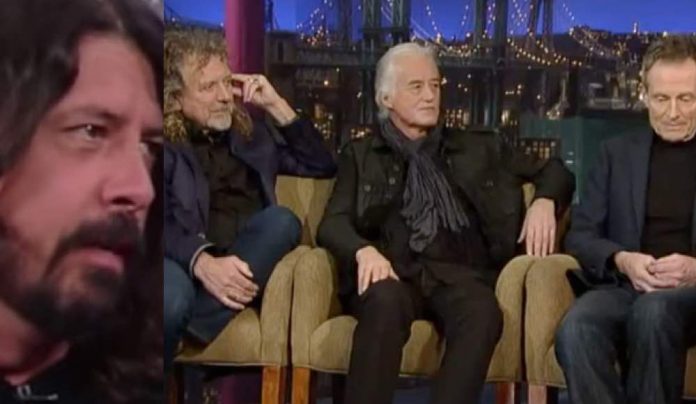 Led Zeppelin guitarist Jimmy Page revealed in a new social media post that Foo Fighters frontman Dave Grohl offered reunited members of Led Zeppelin to record with him in 2008, but never followed up on it, though he soon formed Them Crooked Vultures with John Paul Jones and Queens of the Stone Age frontman Josh Homme.

“During the post-O2 period, I had been playing new material with Jason Bonham and John Paul Jones at rehearsal rooms. I was asked to play with the Foo Fighters at Wembley. This was after the Led Zeppelin show at the O2 attended by Dave Grohl. So, on this day in 2008, John Paul Jones and I played ‘Ramble On’ and Dave sang with Taylor Hawkins on drums. Then Taylor swapped drums with Dave and he sang ‘Rock and Roll’. Dave Grohl said “You guys should come to the States and record with us”. I didn’t hear anything more from Grohl, and John Paul Jones’ communications seemed to dim. The next I heard, they were promoting their new group. 📸 Ross Halfin, 2008.”

“We go into it and it was so fucking bad ass. I was like this is fucking incredible. And the backup singers are like, ‘Whole Lotta Love.’ Like it was a whole thing. It was un fucking real. It was unbelievable.

Grohl told Rolling Stone in the past, “Heavy metal would not exist without Led Zeppelin, and if it did, it would suck. Led Zeppelin were more than just a band — they were the perfect combination of the most intense elements: passion and mystery and expertise. It always seemed like Led Zeppelin were searching for something. They weren’t content being in one place, and they were always trying something new. They could do anything, and I believe they would have done everything if they hadn’t been cut short by John Bonham’s death.

Zeppelin served as a great escape from a lot of things. There was a fantasy element to everything they did, and it was such a major part of what made them important. Who knows if we’d all be watching Lord of the Rings movies right now if it wasn’t for Zeppelin. They were never critically acclaimed in their day, because they were too experimental and they were too fringe. In 1968 and ’69, there was some freaky shit going on, but Zeppelin were the freakiest. I consider Jimmy Page freakier than Jimi Hendrix.

Hendrix was a genius on fire, whereas Page was a genius possessed. Zeppelin concerts and albums were like exorcisms for them. People had their asses blown out by Hendrix and Jeff Beck and Eric Clapton, but Page took it to a whole new level, and he did it in such a beautifully human and imperfect way. He plays the guitar like an old bluesman on acid.

When I listen to Zeppelin bootlegs, his solos can make me laugh or they can make me tear up. Any live version of ‘Since I Been Loving You’ will bring you to tears and fill you with joy all at once. Page doesn’t just use his guitar as an instrument. For him, it’s like some sort of emotional translator.”