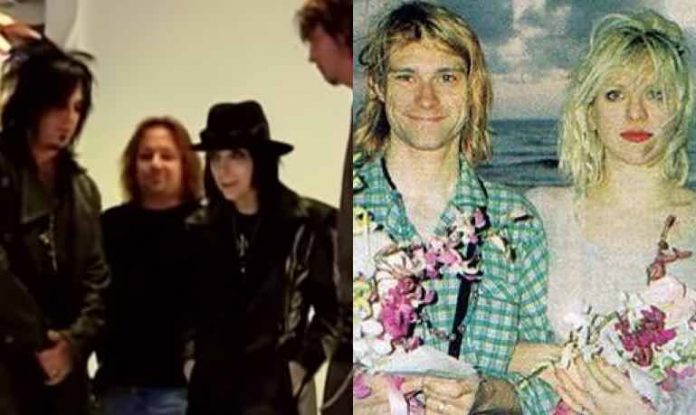 As Alternative Nation reported yesterday, Kurt Cobain’s widow Courtney Love unloaded on the Motley Crue biopic ‘The Dirt’ in a new interview, calling the film ‘stupid and vile about women.’

Lee doesn’t appear to think a Kurt Cobain and Courtney Love biopic about their tragic relationship is coming anytime soon.

Love said about The Dirt, “I recently had three girlfriends over and we sat on my epic Majorelle art nouveau bed. My Rolfer came over to do his thing. We don’t call it massage—they get so pissed off, the Rolfers do. He does deep tissue bodywork on ladies. We watched the dumbest Netflix film ever called The Dirt [a biopic about the band Mötley Crüe]. It’s so stupid and vile about women, and just fucking dumb.

It was super fun to groan together. We had jasmine tea. We all got our bodies worked on and watched this white rapper named Machine Gun Kelly, and we just made jokes. I was like, ‘When’s Ozzy [Osbourne] gonna snort the ant?’ Then, within seconds, he snorted the ant. Then the Nikki Sixx character was like, ‘I have a new girlfriend. She’s sweet. She’s wonderful.’ I was like, ‘And her name is heroin.’ Two seconds later: ‘Her name is heroin.’ I was killing it.”

Courtney is referring to a scene in ‘The Dirt’ where Ozzy Osbourne snorts ants.