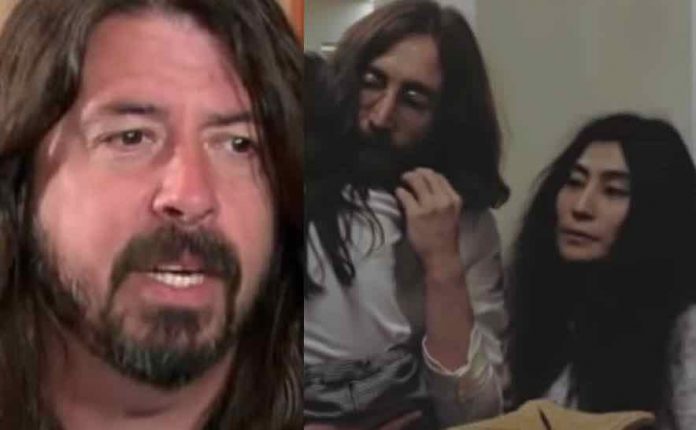 Foo Fighters frontman Dave Grohl was caught with a photobomb by John Lennon’s widow Yoko Ono in a recent photo posted by John Fogerty on Twitter. Yoko looks a little bummed out in the photo, while Grohl is in great spirits like usual. A Rage Against The Machine icon just unloaded on Dave Grohl disrespect.

Fogerty tweeted, “John, Julie, and Dave Grohl from the @foofighters. Plus a very special @RecordingAcad photobomb with @yokoono! 🏆🎵.”

Dave Grohl and Foo Fighters are recording a new album, with a tentative 2020 release planned. A fan on the Foo Fighters Reddit recently posted a controversial opinion regarding one of the band’s classic albums. NickTheGuitarPlayer posted, “I dislike The Colour And The Shape. It’s personally one of my least favorite albums by the band. I find it to be their second worst album they’ve made. I don’t hate it.

The songs are mostly all good, but i just find it really bloated with how many songs are on it. They could have definitely cut the album in half or at least removed 4-5 to songs. There is also just a lot of inconsistency in terms of the flow of the album.”

StarLordAndTheAveAurora said, “The flow was meant to simulate a therapy session following Dave’s divorce. That made me appreciate the album even more.”

Snookerwither2 commented, “I am not trying to say you are wrong, but I have two things to point out: 1) In Your Honour is six tracks longer, meaning TCATS isn’t that packed by comparison. 2) TCATS’ songs are not meant to flow; the contrast between loud, fast songs and quiet, slow ones is meant to replicate the mood swings you might have during a therapy session.”

StarLordAndTheAveAurora responded, “I heavily disagree, but respect your opinion. I’m curious: What’s the one you think is the worst album they’ve done? And what is your favorite and least favorite song from TCATS?” A System of a Down member ‘refusing’ a Dave Grohl offer was just revealed.

John, Julie, and Dave Grohl from the @foofighters. Plus a very special @RecordingAcad photobomb with @yokoono! 🏆🎵 pic.twitter.com/bS2FZRqoo3