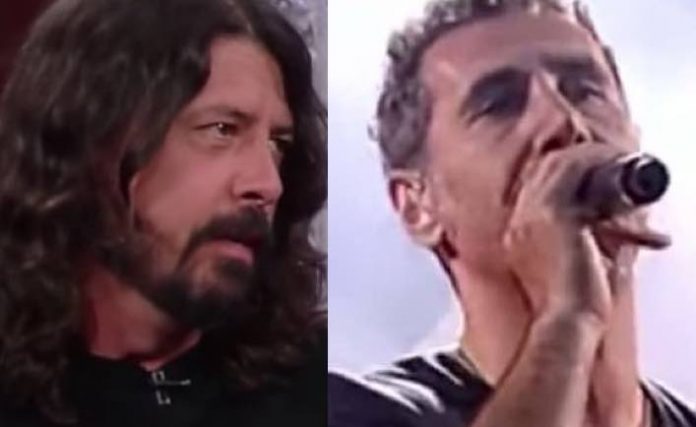 Dave Grohl may have another new band to join, just as he is set to make an appearance with a fired Red Hot Chili Peppers member. System of a Down singer Serj Tankian revealed that he would like to form a major supergroup with Foo Fighters frontman Dave Grohl drumming, Rage Against The Machine’s Tom Morello on guitar, and Red Hot Chili Peppers’ Flea on bass, and Jack Black on vocals/guitar. The sad part is, Tankian would refuse to tour with the band, and would only want to be a studio act it appears!

Jack Black said on social media, “Get that supergroup together one time!” Serj Tankian responded, “You and I co-sing with them but never tour :).”

Taylor Hawkins recently discussed Dave Grohl playing on his new solo album ‘Get The Money’ in a Hot Press interview. He said Grohl “played a little guitar and sang a little bit. He’s also directed a couple of videos for singles. We did one last weekend that’s still being edited.”

“I love it,” he enthuses. “It’s great that their music is so important again. I’m glad they’re getting their due. They deserve it. They’re one of the greatest rock bands ever. The music is timeless. Although the movie is definitely sort of Hollywood-ised – they had to fit a lot into 90 minutes – it’s a great story.”

“It’s a love story not just about Freddie and Mary and his eventual partner, but also between the band. I’m not saying the whole thing is factual, but it needed that Hollywood element, otherwise it’d have been a five-hour movie.” You can read the full interview at Hot Press.