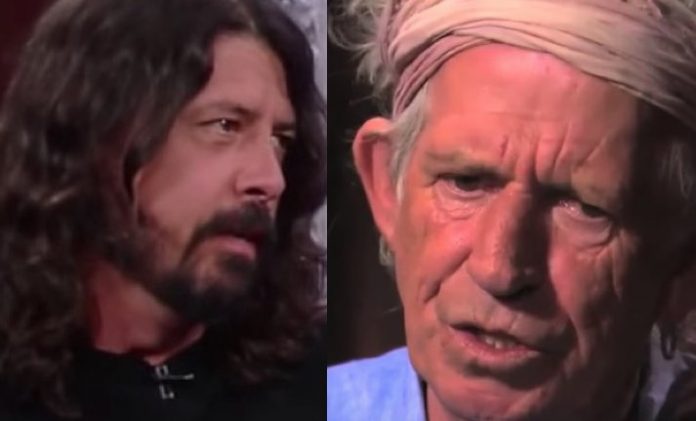 Foo Fighters frontman Dave Grohl discussed playing an early show in Washington DC around 1983 or 1984, and he said that while paying tribute to The Rolling Stones icons Keith Richards and Mick Jagger with a performance, he didn’t realize the song he was playing (“Time Is On My Side”) could be seen as offensive, because he was playing it around old people on the brink of death.

Grohl told Kerrang, “It was probably my neighbourhood band, and we would play backyard parties. We played at a nursing home once! I think it was something we did for extra credit at school, because all of the people in the band were my classmates. We were fucking 12 or 13 years old. There’s a lot of jokes you could make about the audience being dead, but for us it was fucking hilarious. We were playing to people that were in their 90s, y’know? And we played Time Is On My Side [by The Rolling Stones] – we didn’t realise the comedy or irony in playing it!

“We also played our high school Battle Of The Bands. In my high school, I was the only kid that listened to punk rock music. Everybody else was preppie, straight, and so I really wanted to make it a point that I was different. I remember playing this Battle Of The Bands in camouflage pants, a flannel shirt – basically the same thing I wear now (laughs)! – with my Ovation electric guitar with an Exploited sticker on it… doing the theme from [‘80s dancing movie] Footloose! It was pretty ridiculous. Did we win? Of course not!”

Good Guy Dave Grohl granted a gross request by a fan at a recent Foo Fighters show, but sadly, it disturbed a lot of the audience. Dave Grohl recently discussed the feeling of losing your virginity.

Grohl noticed a sign in the crowd, “‘Dave, would you be able to give me…’ Oh, my wristband? Oh, this thing? Ugh. You want this? It’s so nasty. That’s what you want?”

He squeezed the sweat out the wristband, as fans in the audience groaned.

“This is what you want? Crazy motherf**ker. That’s it, okay?”

He then threw the wristband to the fan.