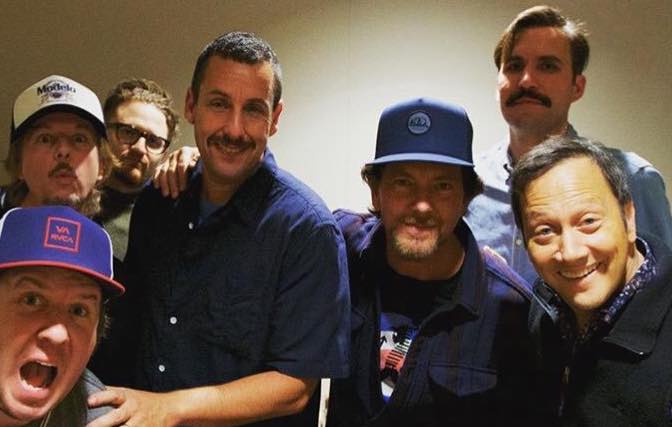 Pearl Jam frontman Eddie Vedder definitely has fans all over entertainment! Jensen Ackles and Jared Padalecki are best known for playing the duo of Sam and Dean Winchester on the acclaimed sci-fi show Supernatural. When they aren’t hunting demons, ghosts, monsters, and other supernatural beings they are hitting up the convention crowd. One such convention was at SPN Dallas 2019 in Plano. Here, Ackles and Padalecki reveal an embarrassing story about Eddie Vedder and Adam Sandler in which Padlecki humorously tried bum a smoke from Vedder, and asked if the cigarette was real. Alternative Nation transcribed Padalecki and Ackles’ comments

Padalecki: So after the gig is over, I’m talking to Adam Sandler or something, It’s maybe six [inaudible]

Ackles: I’m standing next to him and I’m like: ” what did he just say?

Ackles: There it was, it was like a vapor cloud of just anything cool residing in Jared’s body just left. I was just looking at this shell of a person.

[Padalecki and Ackles then reenact the exchange]

Padalecki [imitating himself]: Hey is that real?

[Padalecki gags while trying to smoke]

Ackles [As Eddie]: Nah man, you can keep it.

Ackles: And this is what I did to him: “Thanks Eddie!” [Ackles puts his hand over Padalecki and pretends to walk away.]

Ackles: Eddie was totally cool too, like, he couldn’t of been cooler about it, then watched this poor person fumble with something that he’s never used before, then offered it back to him as if to say: “thanks for letting me borrow your smoke, bro.” Eddie just smiled and went: “nah man, you keep it.”