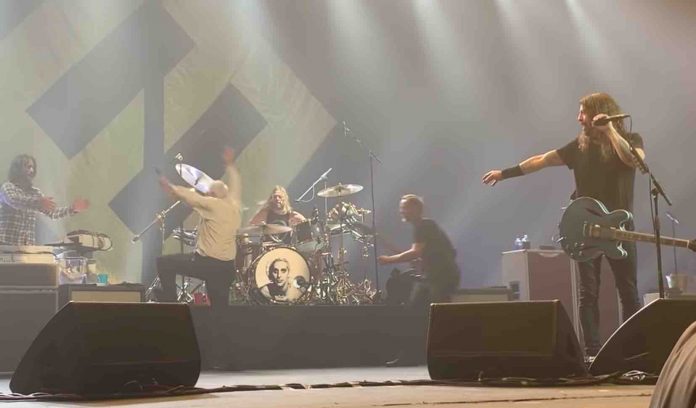 Foo Fighters played their first 2019 show in Las Vegas at the Hard Rock on Wednesday night, and it was a private corporate gig for HARMAN International, a wholly-owned subsidiary of Samsung Electronics Co., Ltd. focused on connected technologies for automotive, consumer and enterprise markets. The performance was part of the CES 2019 trade show.

A fan who seemed like he was having a good time with a lot of liquor named Jay from Bombay came onstage at one point, chugging champagne with Dave Grohl, dancing onstage, and shouting/attempting to sing at times. After the Foos finished their performance, Jay from Bombay wasn’t ready to leave.

Security then came onstage as Jay tried to climb Taylor Hawkins’ drum kit, and he tripped and almost had a bad fall, but caught himself with the help of security. Grohl himself had a fall during the show as well, though fortunately he didn’t break his leg like in Sweden in 2015.

As security escorted Jay offstage, Grohl said, “Give it up for Jay from Bombay right now.”

He then quipped, “His ass is so fired, I don’t know who he works for. Oh shit.”

“How the fuck are we gonna top Jay from Bombay? It ain’t gonna happen.”