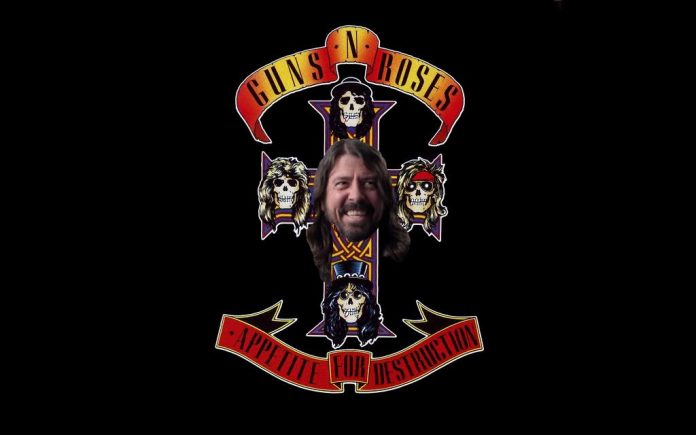 Foo Fighters held a pre-Cal Jam party on Wednesday night at Rami Jaffee’s Fonogenic Studios. Dave Grohl has been cooking BBQ at the Valley Urban Market for the last couple of weekends, and he yet again cooked at this party. He even cooked ‘The Bonzo’ in honor of late Led Zeppelin drummer John Bonham, and ‘The Adler’ in tribute to original Guns N’ Roses drummer Steven Adler.

Adler is very much alive, and was photographed at the party with Grohl. Adler performed as a guest with Guns N’ Roses a few times on the 2016 Not In This Lifetime tour, but he was not offer an expanded role and turned down further guest appearances. Adler felt disrespected by his minimal tour role, especially being the band’s original drummer.

You can view new photos of Dave Grohl at the Cal Jam pre-party cooking ‘The Adler’ below.

How do I even describe this!? BEST DAY EVER!!! Got to meet the most badass, awesome and nicest guy on the planet. Massive item of my bucket list! Had to pinch myself a couple of times to make sure I wasn’t dreaming!!! Pre CalJam party at Rami’s studio. Outstanding music and surrounded by so much talent! #precaljam #fonogenicstudios #davegrohl #foofighters #nirvana #bestdayever #bucketlist #dreamcometrue