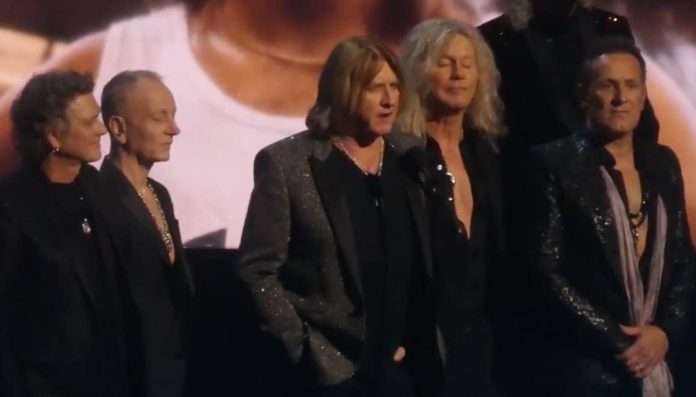 Def Leppard guitarist Phil Collen was recently interviewed by 93.1 WMPA. He discussed not using any drugs, and the band owing millions of dollars in their early days. Def Leppard were inducted into the Rock and Roll Hall of Fame on Friday. Ultimate-Guitar transcribed his comments.

When ‘Women’ premiered on MTV [as the second single off 1987’s ‘Hysteria’], I later read that it was not as big as you thought it was gonna be. Was Hysteria a slow burner when it first started?

“We were in really serious debt, like, $5 million in three years. Studios and everything – shipping, cargo, hotels, and god knows what.

“So we were really in debt, and the first three singles didn’t have absolutely any traction at all. I mean, they were out there…

“But now you look back and you see ‘Hysteria,’ or ‘Women’ – I think ‘Animal’ was the third one – you look at them now, ‘Animal’ is a Top 10 single in England. They caught fire later on, but we were still $3 million dollars in debt when that happened.”

‘Pour Some Sugar on Me,’ the popular story is that it’s one of the last songs written for the record and Joe [Elliot, vocals] came up with that on an acoustic?

“Yeah, he was just sitting around playing this thing, and I go, ‘What’s that? Play that again,’ and within 10 days we’d have recorded the whole song. That was the last one and it came down really fast.”

I read in interview one time when Joe said that you were always bigger in the States and around the world than at home. Was that true?

“Yes, absolutely. We sing in an American accent because we learned the American pop culture. That’s what this music is – it comes from blues, soul, funk, R’n’B, it kind of split up into different factions.

“It just kept evolving, and rock ‘n’ roll kind of dictated, you know, Little Richard and Chuck Berry and stuff like that, and before you know it, you’ve got people screaming, the Elvis thing, The Beatles, Zeppelin, Queen, it just keeps going, it just keeps morphing into something else.

“We learned from it, it’s an American art form, so we initially sang like we’re in America. That was the thing, you sing along to these songs. Also MTV, I think that thing kind of broke us, and that wasn’t such a thing in England.

“But in America, we were primed for it, it looked like it was a cross between Duran Duran and something else, but it was a rock band, videos, and something different. In England, you didn’t really get that thing.”

Give me some eccentricities of [producer] Mutt Lange. I have read stories, I’ve heard things about how he’d make you play one note for a week over and over again; I’ve heard about weird recording techniques… Did he ever make you do something where you were, like, ‘I don’t know man, we’ll do it, but I don’t know…’?

“No, there’s always a method to the madness, and it wasn’t even madness. I’ll give you a great example – the one-string-at-a-time thing.

“We were doing ‘Hysteria,’ it was just me and Mutt in the studio, and there was this part so that guitar, he said, ‘We don’t want it to sound like a guitar, but we definitely don’t want it to sound like a keyboard. If we play the chords but then actually tape them one at a time, it will give it real clarity, still sounding like a guitar – not a keyboard – unique sound to it.’

“We’re doing that, and my friend in Dublin comes and walks in the studio as we’re doing that and he goes, ‘What are you doing? This is really weird.’ Anyone could come in and it would probably look weird, but it ended up sounding amazing and unique, and obviously, when the chorus hits, there are four-five different guitar parts going on.

“So there’s so much going on, you need this clarity, you need these specialized little parts coming in. That wasn’t at perfection, but by a longshot, it has a right feel, the right groove, and the right sound.

“And I think a lot of people get confused, especially with rock bands, they’re kind of notorious for thinking they’re playing great, but actually they’re not, and sometimes they do not groove in, the vibe’s not there, so that was really our focus.”

Your health regiment has become something of a legend. I mean, a lot of you guys look exactly the same as you did 30 years ago. What is your key to success – because I believe you’re in your early 60s, are you not?

“Yeah, 61. The really easy one is just consistently working out. You don’t have to kill yourself, but just keep the blood flowing in the joints. If I stop doing that – even just kicking the bag or something like that – within a week or so, I start aching, I start feeling like the rest of the population of my age.

“So last night, just kicking the bag, all of a sudden the pain’s gone. You got to be consistent with it, and diet. I don’t drink, I don’t take drugs, I don’t smoke, none of that stuff, that really helps.

“I’m a vegan – I know some unhealthy vegans, but again, you just apply and when you’re traveling, you just feel better. It helps, it’s amazing, and that doesn’t cost anything.”