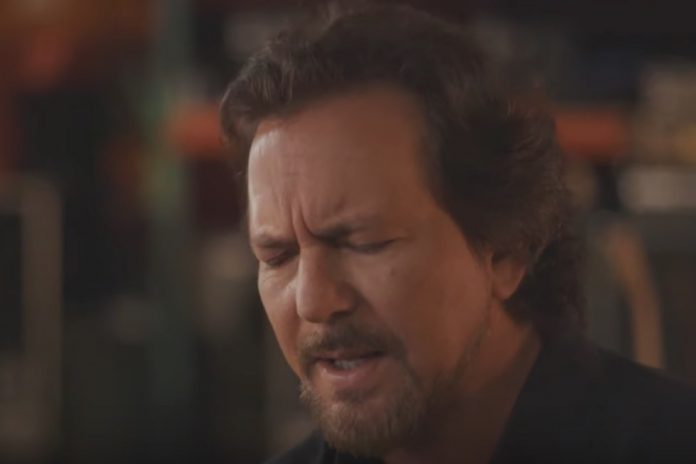 Pearl Jam resumed their 2022 tour at the Pinkpop Festival yesterday, Sea posted a recap on the PearlJam.com forums, including Eddie Vedder announcing a tragedy.

01. Even Flow
02. Why Go
03. Low Light
04. Elderly Woman Behind The Counter In A Small Town
05. Dance Of The Clairvoyants
06. Superblood Wolfmoon
07. Wishlist (Ed improvs lyrics about wishing he lived in Amsterdam and lists all the things he would do and likes, like ‘living in a country without any guns, I think we have had enough. He sings a “thank you” and says we are all friends)/Waiting On A Friend-Jagger/Richards (only played about 20 second or so. No lyrics just the guitar melody)
08. Throw Your Hatred Down-(Young)
09. Lukin
10. Corduroy
11. Quick Escape
(Ed speaks very emotionally about his friend Søren Venema who passed away last year. He owned Palm Guitars. Ed relates how you had to earn Søren’s trust before he would sell you and instrument. Ed has many instruments from Søren in his home studio and feels like his friend is there with him)
12. Sleeping By Myself
13. Given To Fly
14. Daughter/Another Brick In The Wall part 2-(Waters) about 1:30 lyrics and music
15. Jeremy
16. Don’t Dream It’s Over (intro to Better Man. About 40 seconds. Just played the chords and sang “don’t let them win” and another line)
17. Better Man/Save It For Later (with some improved lyrics)-(Charley, Cox, Morton, Steele, Wakeling)
(Ed reminisces on riding the camera crane into the crowd. Footage of the event is shown on the screens while Ed is talking. The cameraman Rob Van Rijn (sp) comes out and says a few words.)
18. Porch
Encore Break
19. Comfortably Numb-(Gilmour, Waters)
20. Street Fighting Man-(Jagger/Richards)
21. Alive